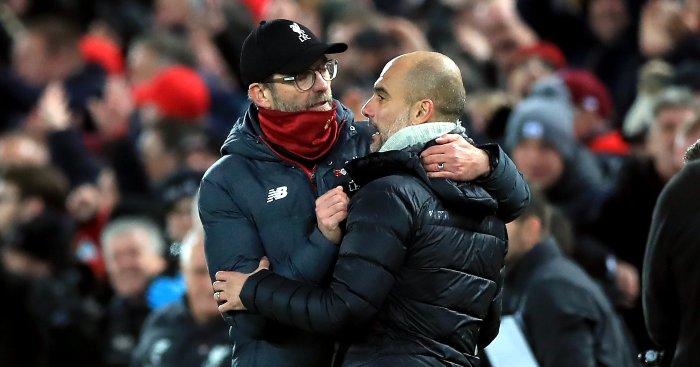 Jurgen Klopp ‘is keen for the Premier League to resume’ but Pep Guardiola is one of four managers known to be reluctant.

Managers of all 20 Premier League clubs were informed on Wednesday of plans to return to full training in phases, starting with small groups before gradually moving to full teams and proper contact.

Jose Mourinho was said to be most vocal during the meeting, particularly with regards to ensuring players and clubs have long enough to prepare. But the Daily Mirror are clearly confused as he has now ‘made it clear he is desperate to return’.

MEDIAWATCH: Is Jose Mourinho ‘concerned’ or a bit of a c***?

Liverpool boss Klopp and Merseyside rival Carlo Ancelotti are similarly eager to restart whenever it is proved to be safe to do so.

Roy Hodgson of Crystal Palace even noted that ‘it was safer to be at the training ground rather than make a trip to Tesco’. He’s great, isn’t he?

But support was not unanimous as four managers are known to have ‘raised concerns about coming back and rushing back to games’.

Contrary to popular belief, it seems that not only clubs threatened by relegation are proving difficult to persuade, as while Nigel Pearson and Graham Potter voiced concerns, they were joined by Pep Guardiola and Frank Lampard.

The Premier League outlined in Wednesday’s meeting that playing games is not yet part of the consideration for returning to training as they are taking ”a baby steps’ approach’ in that government health guidelines must first be met before the league can restart.

With mixed messages now emerging from these conference calls, the Premier League faces a difficult task to convince all stakeholders that football can resume in a safe environment.