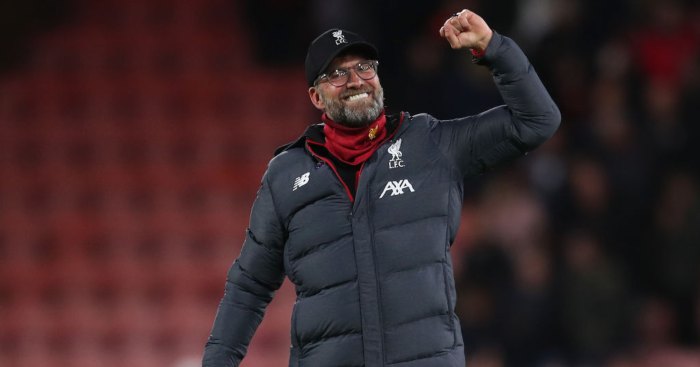 Jurgen Klopp was thrilled that his Liverpool side collected a clean sheet in their 3-0 victory over Bournemouth on Saturday.

First-half strikes from Alex Oxlade-Chamberlain and Naby Keita put Jurgen Klopp’s side on course for a comfortable afternoon at the Vitality Stadium.

Mohamed Salah’s 10th goal of the season early in the second period sealed the three points as the European champions continued their seemingly relentless march towards a first title in 30 years.

The victory sees Liverpool move 11 points clear at the top of the Premier League with Manchester City and Leicester City yet to play this weekend.

Klopp told BBC Sport: “It was a professional performance, controlled, scoring wonderful goals. We didn’t want to make it exciting again so we wanted to control Bournemouth.

“The most used word in the dressing room at the moment is clean sheet – finally!

“Dejan Lovren was hopefully cramp but apart from that it was a perfect game. All round nearly perfect day.”

On Jordan Henderson’s lovely ball for Liverpool’s first goal, Klopp added: “In football you have to break lines, that is how it is. With these ball you can break all the lines and it makes it difficult to defend.

“Wonderful second goal and the third was similar to Shaqiri’s the other week.

“We try with all we have. There will be moments especially between the games where we have to switch the machine off and then switch it on again and be there. We have only three days and play Red Bull Salzburg in an all or nothing game.”