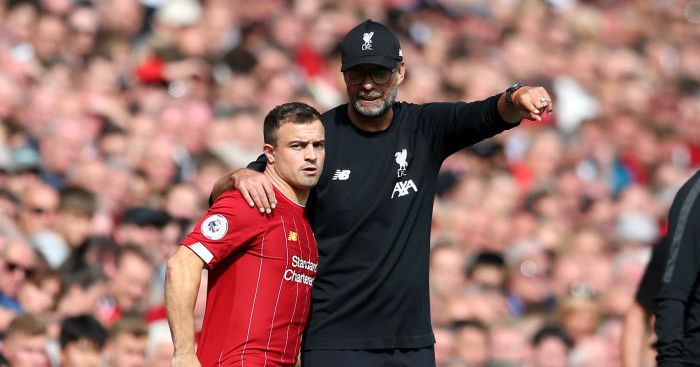 Jurgen Klopp has expressed sympathy for Xherdan Shaqiri, whose “muscles are unbelievable”.

Shaqiri has been restricted to just three starts in all competitions for Liverpool this season due to injury and the relentless form of his teammates.

The forward is said to be considering his future at Anfield as a result, with Roma interested.

Klopp is eager not to lose the Switzerland international – or any other player – this month as Liverpool target the Treble this season.

But the German admits Shaqiri’s situation must be “frustrating”, while praising a player with a physique “different to all others I ever saw”.

“It’s not cool, absolutely not cool,” he told the club’s official website of Shaqiri’s fitness struggles.

“But maybe there are different reasons, for sure. Shaq is a very special player in different departments. His physique is different to all others I ever saw, his muscles are unbelievable.”

Shaqiri has not been sidelined with significant setbacks but small muscle issues that have ruled him out for weeks at a time and disrupted his rhythm.

Klopp says Liverpool are trying to “find the 100 per cent solution for it”, to no avail as yet.

“It’s never ‘big’ so far, but it was always enough to get him out. I can imagine that’s frustrating. It’s frustrating for him, it’s not cool for us. But not to change.

“We work on that obviously, we don’t want to bring in the situation where that constantly happens, but so far we didn’t find the 100 per cent solution for it. We have to see.”

Shaqiri’s last two appearance for Liverpool were as second-half stoppage-time substitutes against Tottenham and Flamengo respectively, with his most recent start coming at the Club World Cup against Monterrey in the semi-final.

The poor lad has played fewer minutes than Caoimhin Kelleher and Harvey Elliott this season.