Home Manchester City Just a number: the record fee for every age from 13-38 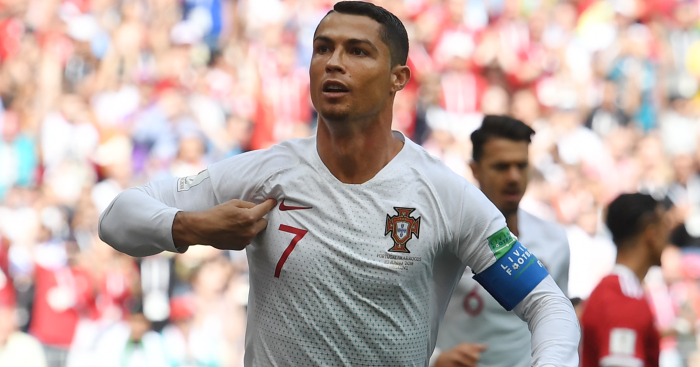 After Cristiano Ronaldo’s Juventus move edged out the £17m Manchester City paid for Claudio Bravo as the biggest transfer fee for a 33-year-old, we bring you the record signings for every age from 13 to 38.

13 – Finley Burns (£175,000, Southend to Manchester City)
Seriously. Manchester City paid £175,000 to Southend 18 months ago to beat Liverpool, Chelsea and Arsenal to the signing of 13-year-old Finley Burns, a defender who was just two years out of primary school. The first major tournament he can properly recall would either be the 2010 World Cup or Euro 2012. It’s at this stage the bitter realisation sets in that you’ve actually done f*** all with your life and you’re a massive wastrel.

14 – Sheyi Ojo (£2million, MK Dons to Liverpool)
Sheyi Ojo joined Liverpool so long ago that Kenny Dalglish was in the midst of his second spell as manager at Anfield in 2011. The Reds were forced into a bidding war with Chelsea for the winger, who had already won two England youth caps at international level before leaving MK Dons. Now 21, he is spending pre-season back with the Reds. Another loan, perhaps?

15 – Fran Merida (£2.2m, Barcelona to Arsenal)
“An absolutely amazing player,” was the assessment Arsene Wenger offered of Fran Merida shortly after the midfielder experienced the initiation any young Spanish player worth their salt should: the journey from Barcelona to Arsenal. The midfielder would make just 16 appearances before leaving to join Real Sociedad in 2007. But he remains the most expensive 15-year-old of all time, having taken that particular record off another Gunners purchase – Jermaine Pennant, for whom Arsenal paid Notts County £2m in 1999.

Osasuna, in case you were wondering.

16 – Vinicius Junior (£39.6m, Flamengo to Real Madrid)
Bit of a cheat this one, as the deal was agreed when Vinicius Junior was 16 but was post-dated to his 18th birthday on July 12, 2018. Theo Walcott had held the record for the most costly 16-year-old ever. Arsenal spent £9.1m to bring in the GCSE-bound wonder from Southampton in 2006. But that fee is a pittance compared to the money it required for Real Madrid to prise Vinicius Junior from Brazil.

The biggest deals to be agreed and completed for 16 year olds this year are Monaco’s moves for Genoa forward Pietro Pellegri and Lyon winger Willem Geubbels. They cost £18m each. Now that’s planning for the future

17 – Alex Pato (£18m, Internacional to AC Milan)
Liverpool once broke the record for the largest fee ever paid for a 17-year-old when they signed Wayne Harrison from Oldham for £250,000 in 1985. Borussia Dortmund spent £8.25m on the ‘next Zlatan Ibrahimovic’ 18 months ago. Such figures are a drop in the ocean compared to the £18m AC Milan paid to sign future Chelsea legend Alexandre Pato in 2007.

18 – Luke Shaw (£27m, Southampton to Manchester United)
Edging out Wayne Rooney by £2m is close friend of Jose Mourinho, Luke Shaw. The 18-year-old had just been named in the PFA Team of the Year when Manchester United swooped to sign him for just under £30m in summer 2014. Four up-and-down years later, he is one of the fittest and fastest players at Old Trafford, and is even playing a spot of football here and there.

19 – Kylian Mbappe (£128m, Monaco to PSG)
Shaw lost his ‘most expensive teenager in the world’ crown to team-mate Anthony Martial a year later as he left Monaco for United in a £36.7m move. Then in February this year, PSG activated the clause to make Kylian Mbappe’s loan move from Monaco permanent and that rather blew everything else out of the water.

The initial transfer fee was £128m, and that was before bonuses and add-ons that we’re guessing are probably going to end up getting paid and will eventually lift the price to £162m. He’s handy.

Just thrilled to bits that those Thailand boys were rescued from that cave in time to see this bit of madness from Mbappe 😭😭😭 pic.twitter.com/p6Yo7zSXjl

20 – Ousmane Dembele (£97m, Borussia Dortmund to Barcelona)
He must have one hell of an agent. After one season in Germany that reaped six Bundesliga goals, Barcelona splashed a massive amount of Neymar money on the Frenchman, who promptly ruptured a thigh muscle. He replaced Raheem Sterling as the world’s most expensive 20-year-old and, despite the “silly money” Barca paid for him, probably annoys yer da slightly less.

21 – Neymar (£71.5m, Santos to Barcelona)
It’s difficult to decipher the exact fee for Neymar’s move to Barcelona in 2013. Announced at the time as a £49m deal, legal wranglings and tax disputes take the actual figure to something slightly above £200m – although the official price paid for the player himself was revealed in January 2014 to be £71.5m. It is almost double the £38.1m fee Monaco paid Porto to sign a 21-year-old James Rodriguez in 2013. Who could have ever predicted that Barcelona would eventually almost treble their money?

22 – Thomas Lemar (£63m, Monaco to Atletico Madrid)
John Stones’ £47.5m move from Everton to Manchester City is knocked off the top spot for 22 year olds by Thomas Lemar’s £63m move from Monaco – who seem to feature a lot here – to Atletico Madrid last month. Lemar becomes the latest of those who starred in Monaco’s all-too brief reign atop French football to head off for pastures new while leaving the Monegasques coffers significantly swelled.

23 – Paul Pogba (£89.3m, Juventus to Manchester United)
The most expensive footballer in the world two years ago but now outside the top five, Pogba can at least console himself with the fact he remains the most expensive 23-year-old. He displaced James Rodriguez, the Colombian having moved from Monaco to Real Madrid for £71m after his Golden Boot-winning exploits at the 2014 World Cup. FYI, Harry Kane is currently 24, which leads us to…

24 – Gareth Bale (£85m, Tottenham to Real Madrid)
The same age as Cristiano Ronaldo when he secured his dream move to the Bernabeu four years prior, Gareth Bale became the most expensive player in the world when Daniel Levy held out for £85m in 2013. The Welshman has a lot to thank Harry Redknapp for: the man who took him from nothing, didn’t try and flog him off to Birmingham for a pittance at all, played him as a winger because Benoit Assou-Ekotto was too good at left-back, and turned him into the player he is today.

25 – Neymar (£198m, Barcelona to PSG)
Officially a metric f***-ton of money and now rather neatly a Double Ronaldo.

26 – Virgil van Dijk (£75m, Southampton to Liverpool)
Replacing Angel Di Maria (£59.7m) as the most expensive 26-year-old is Liverpool’s record purchase, made in January. The world’s most expensive defender…assuming you don’t count occasional left-back Gareth Bale. And you don’t. Obviously. Because that would be mental.

27 – Luis Suarez (£65m, Liverpool to Barcelona)
Riyad Mahrez’s £60m move to Manchester City doesn’t quite get him top spot for the 27 year olds, falling just short of someone else you might remember. Luis Suarez came to England, saw, conquered, bit, did a racism and then engineered a move to Barcelona. Then scored an absolute barrel-load of goals and bizarrely looks something of a pre-Neymar bargain despite developing a strange aversion to Champions League goals in the last couple of seasons.

28 – Gonzalo Higuain (£75.3m, Napoli to Juventus)
Juventus were anticipating the sale of Paul Pogba for a world-record fee, and splurged more than £75m on the striker they hoped would win them the Champions League. He did not, though they came mighty close.

30 – Leonardo Bonucci (£35m, Juventus to AC Milan)
Bonucci moved last summer for a record-breaking fee for a 30-plus player and it initially looked like he might struggle away from the Old Lady, but the form of Bonucci steadily improved as Milan huffed and puffed their way up to sixth place in Serie A. Radja Nainggolan’s move to Inter this summer misses out by an agonising £800,000 here.

31 – Gabriel Batistuta (£23.5m, Fiorentina to Roma)
Even saying the name out loud makes the hair on the back of my neck stand up. Batistuta stayed loyal to the Viola cause for almost a decade, but joined Roma for a then-record fee for an over-30 player in 2000 in a bid to win the Scudetto. Batigol promptly scored 20 Serie A goals as Roma won the title. Magic.

Gabriel Batistuta with a cracking goal against Man Utd in the 99/00 season pic.twitter.com/peaw7pYYLB

33 – Cristiano Ronaldo (£99m, Real Madrid to Juventus)
Bloody hell. Imagine spending a hundred million quid on a 33-year-old and giving them a four-year contract and that not necessarily being a completely insane thing to have done. His game may have changed over the years, but there is no sign of his ludicrous numbers starting to fall away. Just another 44 goals last season, 15 of them in the Champions League including a couple of particularly memorable ones against his new employers. If only Lukasz Fabianski had waited until he was 34 to make his £7m to West Ham, he could have got himself on this list. As it is, he misses out by a mere £92m. He’ll rue that.

34 – Lilian Thuram (£3.4m, Juventus to Barcelona)
Things fall away sharply as we enter into the petty cash section of our list, but Thuram is the oldest outfielder. The Frenchman left Juventus after demotion to Serie B, and largely played a back-up role until retiring with a rare heart condition.

35 – Antonio Mirante (£3.6m, Bologna to Roma)
Aston Villa’s attempt to repeat the Brad Friedel trick (see 37) by signing Shay Given for £3.5m has been edged out by a mere £100k as another veteran goalkeeper, Antonio Mirante, swaps Bologna for Roma. He’s got over 300 Serie A appearances under his belt for Sampdoria, Parma and Bologna, but it’s probably fair to say he’s not been signed as Alisson’s long-term replacement.

36 – David James (£1.2m, Manchester City to Portsmouth)
Signed at the age of 36 and went on to stay for four years and captain Portsmouth to their FA Cup triumph under Harry Redknapp. A good investment from ‘Arry, which is something you can’t say about [redacted] or [redacted] with [redacted].

37 – Brad Friedel (£2.5m, Blackburn to Aston Villa)
Old-goalkeeper-fetishists Aston Villa signed Friedel at the age of 37, and he still managed to play 133 times for them. If you think that’s impressive, he then left for Tottenham and played 67 more.