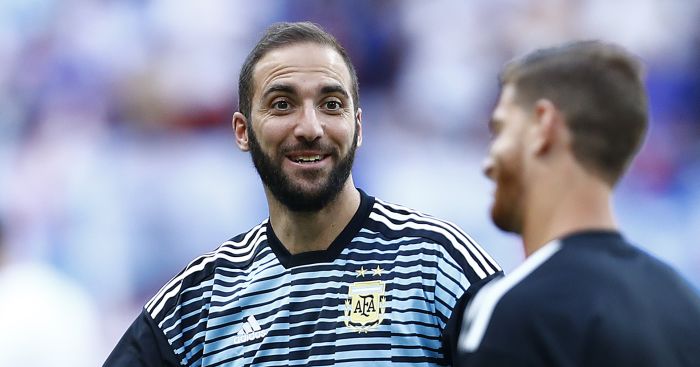 Juventus striker Gonzalo Higuain favours a move to Chelsea over AC Milan, according to a respected journalist.

The Argentina international has been heavily linked with a move to Stamford Bridge as a replacement for Alvaro Morata, who could reportedly be on his way out.

However, on Friday Juventus CEO Giuseppe Marotta denied reports that Chelsea have made a £53million bid for Higuain.

There has also been talk of a switch to Milan, with Leonardo Bonucci moving in the other direction.

And journalist Tancredi Palmeri was asked by a fan: “Is Higuain off to Chelsea or Milan?”

Palmeri then replied saying: “At the moment is off nowhere: Milan are the most serious but he is preferring Chelsea, that aren’t offering anything near to what Juventus want.”

At the moment is off nowhere: Milan are the most serious but he is preferring Chelsea, that aren’t offering anything near to what Juventus want https://t.co/R8UySiv7hp

However, when Maurizio Sarri was quizzed on it recently, he batted away the speculation, saying: “Gonzalo Higuain? I’m waiting for Alvaro Morata to give the best of himself.

“He did very well [in the second match against Inter].

“Much better than in Australia [the first game against Perth Glory].

“It gives me a lot of confidence.”