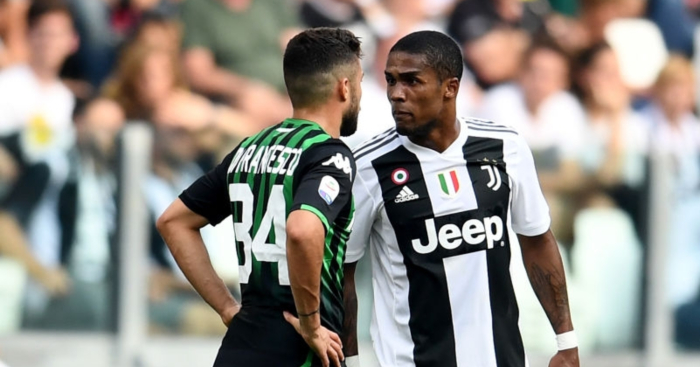 Juventus star Douglas Costa has apologised but could face a long ban after spitting in the face of Sassuolo’s Federico Di Francesco on Sunday.

The flash point came in second-half stoppage time as Juventus saw out a 2-1 victory in their latest Serie A match, with Cristiano Ronaldo scoring twice.

Sassuolo had just pulled a goal back through Khouma Babacar when Costa and Di Francesco squared up.

Brazilian winger Costa already looked to have lost his composure after aiming an elbow and a headbutt moments earlier – but the worst was to come as he spat directly at Di Francesco from inches away.

Costa was sent off after the intervention of the video assistant referee.

He wrote: “I would like to apologise to all Juventus fans for this misleading reaction in today’s game. I also apologise to my team-mates, who are always with me in beautiful and bad moments.

“It was a bad mistake, I am aware of it and I apologise to everyone for this. I make it clear that this isolated attitude does not correspond to what I have always shown in my career.”