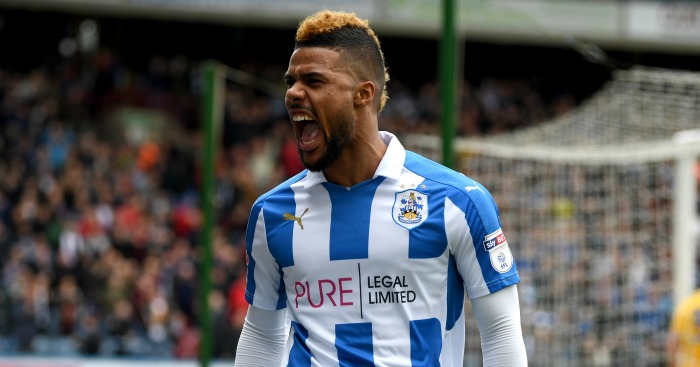 The DR Congo international, who struck 13 goals for the Terriers last season, has operated mainly out wide in the top flight this time around and new strikers Steve Mounie and Laurent Depoitre have grabbed the headlines.

Kachunga was back in the number nine role for the midweek Carabao Cup defeat at Crystal Palace and, although he drew another blank, the 25-year-old is likely to start there again at Turf Moor.

“Maybe I’ll play up front or on the wings,” Kachunga told a press conference. “But it was a good feeling, after a long time, and quite a good match for me in the number nine role. The goal will come.”

Mounie (foot) and fellow striker Collin Quaner (knee) are still out, while Depoitre is doubtful due to a muscle strain.

Midfielder Danny Williams is waiting to learn how long he will be sidelined for after breaking a bone in his foot, and winger Rajiv van La Parra is also struggling with a muscle problem.

“It’s a little bit unlucky that all the strikers have something, but as a team we stay together,” Kachunga said. “When some players are injured, the next one comes in and can play a good role.”

Kachunga, who had a ‘goal’ controversially ruled out for offside in last week’s 1-1 home draw against Leicester, insisted his barren spell was not a concern.

“It’s always good when you play and stay on the pitch,” he said. “Last season I played a lot of games and this season again. It’s good when you feel confidence from the manager.

“Whether I score or give an assist, I don’t put pressure on myself. I know the goals will come.

“I try to give 100 per cent for the team. When I play on the wings or as a number nine, it doesn’t matter.”

The Terriers, in sixth place, and fellow underdogs Burnley, in seventh, are currently ignoring the Premier League script.

Both clubs have lost only once in the league this term and have collected eight points from their first five games.

“I think now the other clubs have a little bit of respect for us because they’ve seen it’s not easy to play against us,” Kachunga said.

He smiled broadly when it was pointed out the Terriers face Tottenham, Manchester United and Liverpool in three of their next four matches.

“We said at the beginning, we have no limits,” Kachunga added. “We’ve started really well. We said after the first games our target is to stay in this league. So far we’ve done a good job.”