Home All The News Kahn on Arsenal: ‘I’ve never seen a team play so bad’ 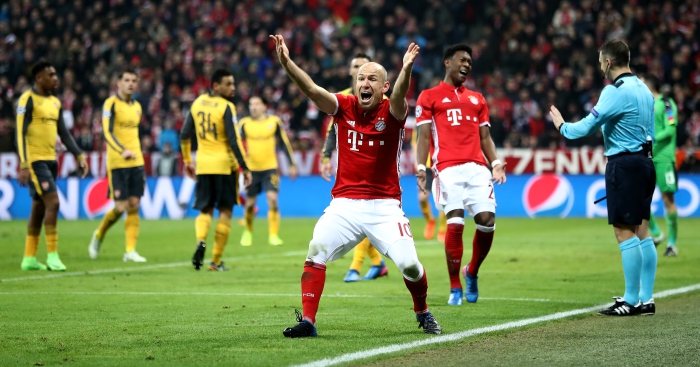 Arsenal’s brutal defeat to Bayern Munich showed the Gunners players have no faith left in manager Arsene Wenger, according to Oliver Kahn.

The 5-1 first-leg loss at the Allianz Arena leaves the Premier League side on the brink of elimination at the Champions League last-16 stage for a seventh straight season.

Calls for Wenger to leave the club at the end of the season, after 21 years in charge, have been amplified since Wednesday night’s dismal display.

And Kahn, who was once widely regarded as the world’s best goalkeeper, suggested Wenger was losing the battle to draw the best from his team.

“It looks like the players don’t take the coach seriously anymore,” Kahn said.

Record signing Mesut Ozil was accused of being a passenger by Kahn, who claimed the Germany international was wasting his talent by failing to make his mark on the match.

Ozil was not alone in struggling in Arsenal’s team. But playing against a club from his homeland, the scrutiny on his performance was turned up.

Kahn, speaking as a pundit for ZDF television, said: “Of course Arsenal have their qualities, especially on the counter-attack, and they have good players like Ozil, but I haven’t seen him. Maybe you saw him.”

“It’s sad to see what Ozil is calling a performance, how passive he plays, a player of his genius and qualities – it’s a shame.”

He added: “I’ve never seen a team play so bad.

“Bayern played a team so catastrophically bad without the ball.”