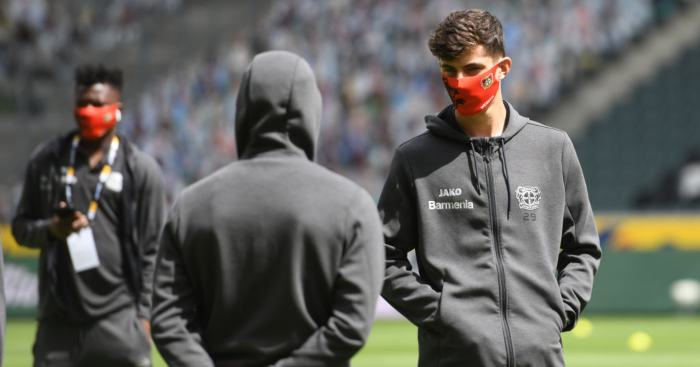 Kai Havertz says he is “very grateful” to Bayer Leverkusen but he will “see what happens” at the end of the season amid transfer links to Man Utd and Liverpool.

Havertz has been on the radar of a number of top clubs in Europe for some time but with the Bundesliga the only major league on the continent to have restarted, all eyes are on the German top flight.

Indeed, Havertz is well in the spotlight after scoring his second brace in as many matches in Saturday’s 3-1 win over Borussia Monchengladbach, taking his tally to 14 goals in 36 games this term.

Such form has seen him heavily linked with a move away at the end of the season – with Liverpool and Man Utd among the interested clubs – but speaking to Sky in Germany (via Goal), Havertz was coy about his future.

“I do not like to say, of course, that there is a lot of speculation,” the 20-year-old said. “I’m concentrating on this season and will see what happens afterwards.

“I am very grateful to Leverkusen and I don’t want to mess it up in any way.”

He added after Saturday’s 3-1 victory: “We’re happy about the win. We put it on ourselves to win here and we did that.

“We had to really give everything today and I think we deserved to win in the end.”

The result put Leverkusen – who are now unbeaten in seven Bundesliga matches  – third in the table, although they could be leapfrogged again if RB Leipzig can win against Mainz on Sunday.

Havertz has now been involved in nine goals – scoring six and assisting three others – in his past six league matches.