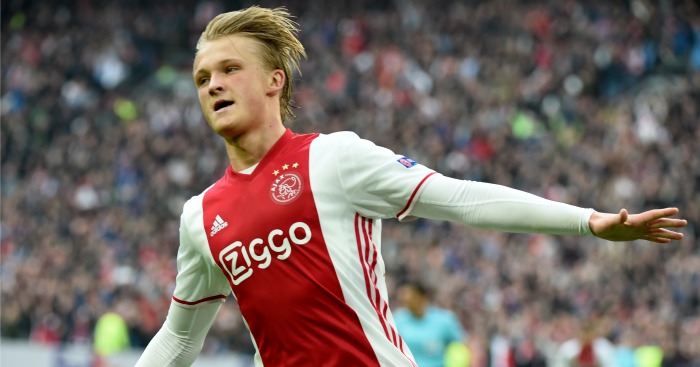 We’ve limited our search to the top ten leagues of Europe, so we’re acknowledging Belgium and Portugal but we will have no truck with Lithuania and Latvia. Here are the 17 players who are 23 or under with at least 13 league goals this season…

Youri Tielemans (Anderlecht, Belgium, 20, 13 goals)
We have to declare ourselves very happy indeed that another bloody brilliant young player – who has scored 13 goals from central midfield – has decided to join Monaco. In two years’ time, he will be worth double the £22m he will cost the French champions.

As expected. Youri Tielemans will undergo a medical at Monaco this week. He won the Belgian Pro Player of the Year award today. #asm pic.twitter.com/CNOuQ38ady

Sebastien Haller (FC Utrecht, France, 22, 13 goals)
The big, handsome striker has already made a summer move, with Eintracht Frankfurt spending around £7m on the France Under-21 man. He leaves something of a hero in Utrecht.

41 – Only Luuk de Jong (44) scored more Eredivisie goals than @HallerSeb since his debut for @fcutrecht in January 2015. Adieu.

Sandro Ramirez (Malaga, Spain, 21, 14 goals)
Everton, Tottenham, Southampton and Atletico Madrid are said to be very interested in Ramirez, who has ended the season with a flourish of seven goals in nine games. A product of La Masia, this boy is something special.

Steve Mounie (Montpellier, Benin, 22, 14 goals)
Could he overtake Stephane Sessegnon as the best footballer to come out of Benin? Could he be coming to West Brom this summer? At 6′ 3″ and nicknamed The Tank, he will inevitably be described as ‘suited to English football’. Just look at these duels; his record screams Tony Pulis.

Kylian Mbappe (Monaco, France, 18, 15 goals)
What can be said about Kylian Mbappe that has not already said before? This kid is absolutely the real deal, and he is sensible and mature to boot. Monaco did not lose a single league game with Mbappe in the starting line-up on the way to their unlikely title triumph.

Kylian Mbappé is the youngest player this century to score 15 goals in a single season in Europe's top 5 leagues.

Andre Silva (Porto, Portugal, 21, 16 goals)
Could Portugal finally have a bona fide out-and-out striker to take some of the pressure off Ronaldo? It says something about Silva’s impact that Portugal won Euro 2016 and then promptly installed him as their starting striker. He has five goals in six games for his country. It’s just a shame for Porto that he only scored once in their last ten games of the season as they finished second.

Kasper Dolberg (Ajax, Denmark, 19, 16 goals)
Ridiculously blonde. Ridiculously good. Ridiculously unlikely to be at Ajax for much longer, with Jurgen Klopp recently describing him as a “fantastic player” and Manchester United credited with an interest in a player they will face in the Europa League final.

Keita Balde (Lazio, Senegal, 22, 16 goals)
Eight goals in his last five Serie A games have made Balde incredibly hot property in Italy, with Juventus and Milan both keen on a striker who could move in a double deal with Lucas Biglia. According to Wikipedia, Balde was cast out of Barcelona’s youth team for putting an ice cube in a teammate’s bed. Which sounds harsh.

Riad Bajic (Konyaspor, Bosnia and Herzegovina, 22, 17 goals)
Destined to join a big Turkish club this summer – though Hoffenheim and Koln have also expressed an interest – Konyaspor’s £400,000 signing from Željezničar is going to make them a pretty penny. Right now he would cost closer to £5m.

Enes Unal (FC Twente, Turkey, 20, 18 goals)
Described in The Guardian as ‘the most exciting player to have left the Super Lig since Arda Turan’, Unal is still a Manchester City player and is now a full Turkish international. You will not be surprised to learn that Twente want him for another season and Fenerbahce are also interested. Over to you, Pep.

Dele Alli (Tottenham, England, 21, 18 goals)
You may have heard of him. The PFA’s Young Player of the Season has formed a phenomenal partnership with Harry Kane, ending the season not far shy of joining the 20-goal club. Dynamic, effective and a little bit nasty. Long may he continue to improve.

Dele Alli has now scored 50 league goals in his career.

He's a midfielder and he's only 21. Quality. pic.twitter.com/QKNKz3UiuE

Timo Werner (RB Leipzig, Germany, 21, 21 goals)
Very much on the wish-list of Jurgen Klopp this summer but the smart money is on Werner sticking around for one season of Champions League football with RB Leipzig. If you want a giggle, take a look at all the Liverpool fans on Twitter who believe a 21-year-old with 21 Bundesliga goals is just not good enough for their Reds.

Henry Onyekuru (Eupen, Nigeria, 19, 22 goals)
If you want to make an impact ahead of a potential summer move to the Premier League, scoring ten goals in ten play-off games will do the trick. Not bad for a player who largely operates from the left wing.

Andrea Belotti (Torino, Italy, 23, 25 goals)
Ah, the striker Milan fans really want. And we mean really, really want. The problem is that Torino are insisting on £86m. Now that’s rather a lot of money.

What if 1 MILLION @acmilan supporters all around the world start buying @gallobelotti 's Milan jersey? We'll buy the player? #belottimilan

Harry Kane (Tottenham, England, 23, 29 goals)
He’s one of their own. And we can officially say now that we believe he might be rather good.