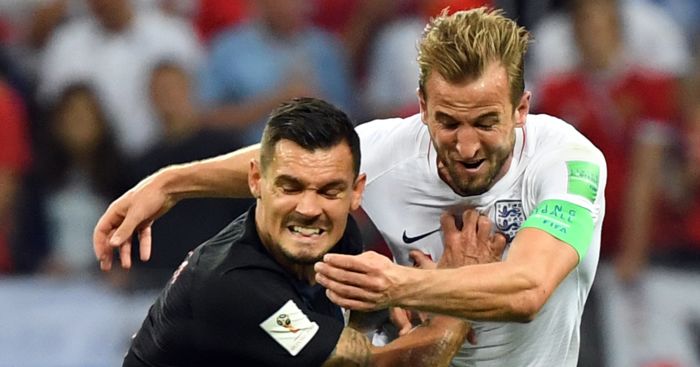 Harry Kane didn’t interpret Dejan Lovren’s comments about England as “a threat” ahead of their match against Croatia on Sunday.

Lovren and Sergio Ramos have been in a war of words for some time, with the Liverpool centre-half laying into his counterpart earlier this month.

Ramos responded in kind ahead of Spain’s UEFA Nations League clash with Croatia on Thursday.

Croatia emerged as 3-2 winners in a pulsating match, with Tin Jedvaj scoring the decisive goal in stoppage time after Ramos had equalised from the penalty spot.

After the game, Lovren took great pleasure in revelling in the victory on Instagram live and had a warning for England too.

“Go ahead and talk now buddy. Buddy! Elbowed him good.

He then covered the Spain badge stitched onto his shirt and added: “Only this side [Croatia] is worthy. Now to beat England and walk out like a boss!”

When asked about Lovren warning England would be next, Kane replied: “I don’t think it’s a threat, I just think they are going to want to win the match as much as we are.

“Like I touched on earlier, I think it’s important we don’t get caught up in anything surrounding the game and just focus on our job and what we need to do.

“We know we’re more than capable of winning the game if we get everything right, so it’s down to us to go and do that.”

When asked about Lovren and Ramos’ rivalry, Kane added: “That’s not for me to compare them two. Obviously I think Ramos, his record speaks for himself, the amount of trophies he’s won, the amount of big games he’s played.

“Of course Lovren is another fantastic defender and I look forward to going up against him tomorrow. It’s a matter of opinion, obviously he has his opinion – some players are more outspoken than others, but from my point of view it’s not to judge them but focus on myself and my team.”