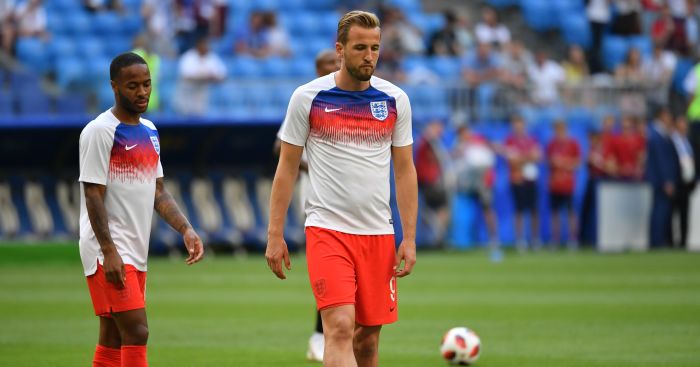 Kane & Sterling
No doubt there’ll be loads of e-mails praising Harry Kane and stating “that’s why he’s on the pitch”, but in reality, he shouldn’t have been, for 85 minutes he had been ineffective (apart from one superb through ball for Raheem Sterling), static and frankly, rubbish.  Had he played anywhere near the standards he has set, the game would have been out of reach, England 2 or 3 goals to the good and “good game management” would describe the last boring 20 minutes.

He and Sterling were by far Englands two worst players and should have been hooked after 60/65 minutes, the defence had coped reasonably comfortably with anything Croatia offered going forward, which wasn’t much, the midfield had, for the majority of the time, been lively, creative and up front Rashford and only Rashford, had caused the Croatian defence any trouble.

There’ll also be praise for Sterling, ” his pace causes panic and allows the others more space”, I don’t think it does ‘cos whilst he may get beyond the defenders, by the time he’s got the ball under control and had two or three touches, everyone has recovered.  I can’t remember a single time when he dribbled past a defender to create a crossing opportunity.

So all in all, Southgate got lucky by not replacing these two and the fact that Ben Chilwell eventually delivered a decent dead ball kick, great wasn’t it, wouldn’t have it any other way!!!!!
Howard (City are great, they make Sterling look good) Jones

Questioning qualification
What a game! This tournament is proving to be a massive success, with top nations playing some proper competitive games, and all nations
having a realistic qualifying route to Euro 2020. So much so, that why should UEFA bother with traditional qualification at all? There’s no qualifying for the top nations in other sports’ major events (cricket and rugby, for example).

How about making the Nations League a yearly tournament, and working qualification for the Euros entirely in to the tournament.

Qualification is hellish, boring and has been made redundant in its  current format.

After our recent run of games, who fancies an away trip to San Marino or Macedonia?
Rob S

But wouldn’t it be great if the BBC and/or ITV were able to show the “final” games to a national audience, rather than England’s success in reaching the finals being limited to those paying for Sky? The Sky deal’s been done but I can’t help but feel the country will miss out by the games not being treated in the same way as the World Cup/Euros (which are all broadcast on ‘free-to-air’ stations). If the Nations League final games were on the BBC/ITV it would ensure the whole country could get behind our boys in June. It would make such a difference to how the games are supported back at home. With Sky controlling access it’s hard to see how the country can easily recreate this summer’s epic party….
Justin ‘I was singing It’s Coming Home at the top of my voice at Wembley yesterday” Springham

Scudamore’s five million
What annoys me most about the five million pound present is the complete lack of imagination that’s gone into it. If they think he’s done such a good job fine, but come up with something that he can actually appreciate or put on his mantelpiece and admire in his retirement. Or even some personalized golf clubs. But simply a cheque? That’s like when my gran used to give me a ten shilling postal order for Christmas!
Tim Royall GFC

Buy more
This has probably been done already but I need to blow a big email kiss in the direction of Matt Stead for including a Chuck reference in his piece on Ranieri’s favourite players.

‘A player with no shots in 73 minutes was somehow the biggest threat to either side over the full 90’ How? that to me shows he was actually no threat at all.

‘he completed six dribbles – two more than Croatia managed overall – but did not create a single chance.’

Looks very good and flash but actually delivers little substance or end product… unfortunately that is the norm. I would think most opposition managers would be quite happy with those stats. Its infuriating as I don’t see a desire to improve end product, as he gets constant praise for looking good. He’s Englands version of Adama Traore.
Duncan

Middle Eastern politics
I have been on the verge of writing in on this subject for a long time but have always thought better of it as this site is predominantly a football website. However, while he is certainly not the worst culprit by a long shot, Minty, LFC’s email was the straw which broke the camels back.

Since they were awarded the 2020 World Cup it has been popular to bash the State of Qatar. The majority of the time this is over real issues (worker welfare, corruption with the bid etc.) which need to be raised and discussed. And rightfully so. The issue I have is with those who have read a few articles here and there and now feel the need to inform others and frequently spread misinformation.

There is a view that the Middle East is a terrible place run by dictators and fascists. That every country in the region is governed in the same way as Iraq under Saddam. While I cannot speak on the workings of the entire region I am familiar with Qatar and in it’s case I can say this is untrue. I lived in Qatar for 10/11 years so I have a decent reference point.

Yes the country has a sovereign (the Emir) however he works within a constitution voted for by the Qatari people in 2003. While the Emir does ultimately hold power, should he operate in a non-constitutional manner he can be held to account. It is not a dictatorship like in North Korea for example. This is a Constitutional Monarchy and is a form of Government. As a side note – Governments don’t have to be voted for. It just happens to be that way in the majority of the world.

To suggest that threats to power are dealt with in a heavy handed manner citing how such regimes deal with journalists is laughable. Qatar operates the news station Al-Jazeera which has brought the ire of many of the gulf states through it’s willingness to air dissenting views. This has given Qatar the image of being one of the more liberal countries in the Middle East. In fact the closure of Al-Jazeera is one of the demands made by its neighbours which effectively surmounted to giving up its sovereignty.

My point is this. Yes Qatar is a country with a number of issues and by no means an oasis. It is a young country gaining independence from the UK in 1971 and so understandably has some way to go. It is not some lawless backwater and is actually striving to break away in many regards from the machinations of its neighbours. The spreading of misinformation and half truths doesn’t help anyone. In today’s day and age it is not difficult to educate yourselves a little instead of regurgitating what you’ve heard. And try not to be condescending if you feel the need to express an opinion.

In football terms, be more Gary Neville/Jamie Carragher/Jermaine Jenas than Chris Sutton/Garth Crooks/Michael Owen.
Cevski, THFC (I think Minty does have a point about LFC though).

Elitist hypocrisy
As JN accuses Scudamore of being brilliant at his job, so JN himself is brilliant: “If none of this makes sense to you, if you don’t think there’s a problem, if you can’t see what I’m talking about, that’s simply because their mind control is very, very good and relentless.”

So anyone who disagrees is a fool, someone whose mind is being completely controlled, and only a very few intellectual elites can understand what’s going on .

I’d say “again” except you never published the last letter pointing out similar F365 hypocrisy, which is coming thick and fast these days.
Nebs, Johannesburg