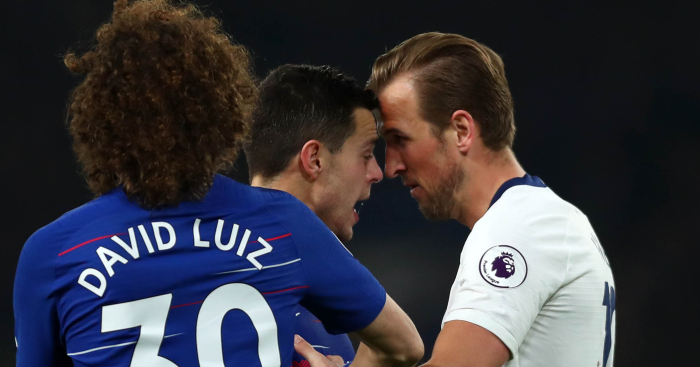 The England captain appeared to move his head towards the Chelsea defender after the pair clashed in the first half of Spurs’ 2-0 defeat at Stamford Bridge on Wednesday.

The incident, which stemmed from Kane closing down David Luiz after Spurs had returned possession to Chelsea, was not acted upon by referee Andre Marriner when it occurred.

Press Association Sport understands the incident involving Kane and Azpilicueta was seen by the match officials at the time, so as such the Spurs forward will not be facing any further disciplinary action.

The news will come as welcome relief to both Spurs boss Mauricio Pochettino and Kane, who only returned to the team last weekend after a six-week absence with an ankle injury.

In a worst-case scenario the England captain could have been charged with violent conduct and face a three-match ban, which would have ruled him out of Saturday’s north London derby against Arsenal at Wembley, along with games against Southampton and Premier League leaders Liverpool.

Kane did, however, later receive a yellow card after another tussle with Luiz in a feisty encounter.

“I think he’s so competitive on the pitch,” boss Pochettino said of Kane. “We were frustrated, we want to win, we show our character.

“Things that happen that we don’t know because it’s impossible from outside the pitch to see what is going on inside. But that is football.

“It’s not a thing we should be worried about. When you finish the game and shake hands, big hug and the game finishes and it’s finished.”

Pochettino is also waiting to hear from the FA over his punishment for an improper conduct charge.

The Spurs boss was sanctioned after clashing with referee Mike Dean at the end of the 2-1 loss at Burnley on Saturday.

He accepted the charge and is awaiting punishment after turning down the chance of a personal hearing.