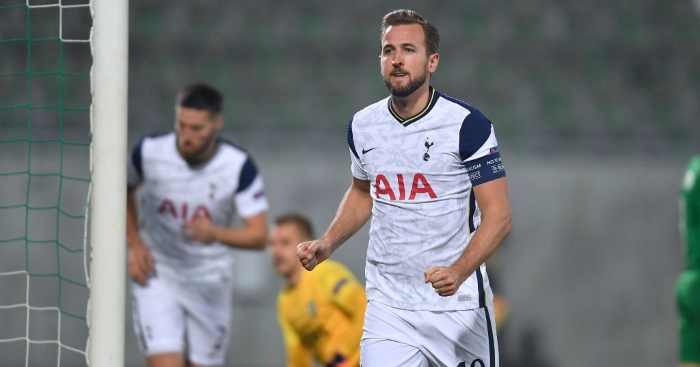 Harry Kane scored his 200th Tottenham goal in his 300th appearance on Thursday night. He becomes the third Tottenham player to reach that landmark, while also currently sitting just one goal short of becoming the first Tottenham player to score 150 Premier League goals for the club. Here’s a look at just a few of the big milestone goals along the way…

Like so many others, Kane’s earliest chances at Spurs came often a) from the bench and b) in the Europa. It wasn’t until his sixth appearance in that year’s competition that he finally got off the mark, providing late gloss to the scoreline after a veritable who’s who of Tottenham goalscoring greats had sealed the points before half-time: Steven Pienaar, Andros Townsend and, to be fair, Jermain Defoe.

Having been discovered after a run of three defeats in four games during Tim Sherwood’s gillet-and-banter reign, Kane finally got his first Premier League goal to put Spurs 2-1 up against bottom-of-the-table Sunderland. It was set up by Christian Eriksen, which is something that would happen a further 32 times over the years to come. As an aside, a goal and two assists that day took Eriksen to a combined 13 goals and assists for the season in the 33rd game of the season, more than any other Spurs player. Kane has 14 goals and assists in seven Premier League games so far this season.

We’re now at the start of the Mauricio Pochettino era, and the single greatest game of football ever played. Shut up, it is. First, it was the game where Erik Lamela gave every football fan a raging Rabona with a ludicrous goal. Around that, Kane scored three goals playing as a number 10 behind Emmanuel Adebayor. Then, in an early shadowing of his future all-round adaptability, Kane ended up in goal after Huge Lloris got himself sent off four minutes after Poch had used his final substitution. Turns out that goalie is the one position Kane can’t play, though: he let an 89th-minute free-kick squirm under him to give Asteras a consolation.

😅 Harry Kane Ending The Match In Goal And Conceding A Howler!

Kane scored three Premier League goals under Sherwood at the back end of 2013/14 but was second choice behind Roberto Soldado under Pochettino in the Premier League. Kane’s prolific Europa League form was making a strong case, and he came off the bench just before the hour mark with Spurs a goal down at struggling Aston Villa. Nacer Chadli equalised with 10 minutes to go before a deflected Kane free-kick in the final minute earned Spurs a huge three points. It was big for Spurs, but bigger for Kane. He started the next Premier League game and really has hardly looked back.

Kane was halfway to completing his one season of wonder and Chelsea were well on their way to the Premier League title when Jose Mourinho’s in-form side arrived at White Hart Lane to be spectacularly torn apart by Poch’s Spurs. Kane scored twice, the first a spectacular equaliser in which he somehow manoeuvred his way through challenge after challenge before arrowing a 20-yard strike into the bottom corner.

Two second-half goals turned a half-time deficit into a famous win, Kane’s late, clinching header really kickstarting the “One of our own” legend. Kane now has 10 Premier League NLD goals – another record.

Kane’s 50th goal came in an FA Cup clash with Leicester. A fitting landmark goal for many reasons, containing as it does a great many separate Kane goalscoring tropes. A late goal, against Leicester, and a penalty. None more Kane.

Kane’s ninth-minute opener at Stoke was his 20th of the season and would ultimately be the one that sealed his first Golden Boot. He scored a second after the break in what would prove to be Tottenham’s final win of the season as their title bid unravelled spectacularly in the closing weeks. The 22nd and final Premier League goal of Kane’s season came soon after at Chelsea, and is not what that particular game is best remembered for.

Spurs’s 2016/17 Champions League campaign was, frankly, crap but Kane still got his first couple of goals at the highest level of club competition along the way. More memorable – for better and worse – nights in the competition lay ahead.

Spurs finished second in the 2016/17 Premier League, seven points behind Chelsea, but Kane secured the Golden Boot once again by scoring seven goals in the last week of the season, helping himself to four at Leicester in midweek and three more at Hull on the final day of the season as Spurs recorded their record Premier League away win twice in four days.

After failing to score in August as was by now customary, Kane got off the mark for the 2017/18 season with a mishit cross at Everton in just his 169th Tottenham game. Scored a more conventional second after half-time and was off and running once again.

Let it never be said that Kane doesn’t know how to get an achievement over the line. Having scored back-to-back hat-tricks to win the Golden Boot in May, he did it again in December to break Alan Shearer’s record for Premier League goals in a calendar year eventually reaching 39 from 36 games (Shearer scored 36 from 42 in 1995). Even though that’s not a thing. Kane scored a thoroughly ludicrous six Premier League hat-tricks in 2017 – more than Dimitar Berbatov, Andy Cole, Ruud van Nistelrooy, Robin van Persie, Ian Wright, Jermain Defoe, Les Ferdinand, Fernando Torres and plenty more managed in their whole Premier League careers – to go with one in the FA Cup and another in the Champions League. Perhaps weirder still, has yet to score another Premier League hat-trick since 2017.

Kane’s 100th top-flight goal came at the end of a ludicrous game at Anfield back when the two teams were evenly matched. Spurs twice came from a goal down to nick a point, with Kane scoring a last-gasp penalty having seen Loris Karius (remember him?) save an earlier effort. It was Kane’s 141st Premier League appearance, making him second fastest behind only Alan Shearer (124) to that particular landmark.

Kane was bidding for a third straight Golden Boot but was trailing Mohamed Salah when Christian Eriksen’s free-kick at Stoke appeared to evade everyone before finding its way into the net. Kane claimed it flicked his shoulder, and Spurs successfully appealed to have a goal taken off one of their own players and given to another. Salah still won the Golden Boot, while Kane earned a reputation for selfishness that he is now having to provide a million assists per season to try and shift.

Kane’s second-half brace helped Spurs overturn a 2-0 deficit in Jose Mourinho’s first European game at the club and also took Kane to 20 Champions League goals in just 24 games – faster than anyone else has ever reached that particular arbitrary landmark.

Kane scored Tottenham’s fifth of a bizarre afternoon at St Mary’s where Spurs had been second best for a large chunk of the game. But the goal wasn’t Kane’s big contribution to this one, having previously set up every one of Tottenham’s first four goals, each of which were scored by Heung-Min Son. It was the first time anyone had assisted the same player four times in a Premier League match.

The first goal came in the Europa, the 200th came in the Europa. Once he was named in the starting line-up for the group game in Bulgaria with 199 goals to his name you thought it wouldn’t take long for his 300th appearance for the club to become a double milestone. Missed a second-minute sitter, smacked the post from 20 yards, and then eventually nodded home a corner to end 13 minutes of agonising wait. He got an assist 10 minutes later as well, because that’s what he does now. In all this season has has 12 goals and 10 assists in 13 matches. Next up: Premier League goal number 150…