Home All The News Karanka: Premier League battle not my toughest test 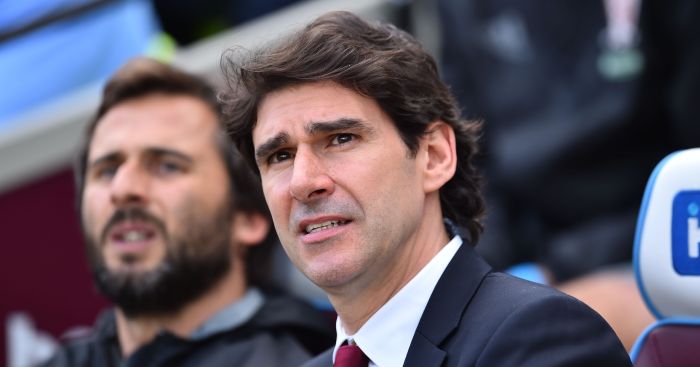 Aitor Karanka is convinced the battle to keep Middlesbrough in the Premier League is not his toughest as a coach.

The 43-year-old Spaniard saw his side slip to the brink of the bottom three last weekend when a 1-0 home defeat by Watford left them above the red line only on goal difference and without a win in six league outings ahead of Saturday’s daunting trip to Arsenal.

However, Karanka is confident he is a better coach than he was the day he arrived in November 2013, with the Teessiders then flirting with relegation from the Sky Bet Championship.

Asked if Boro’s current run represented the most challenging period of his career to date, he said: “I think it was tougher at the beginning.

“Now I am much better than I was three years ago and the situation is not the same, but it is similar. I remember when we played against Millwall away in November, December – at the beginning of that game, we were two points above the relegation positions.

Now preparing for our next game. As ever, we're working together with determination. #UTB pic.twitter.com/HdBSNcEqrw

“Now we are more or less in the same situation and again, now I am much better than I was that season.”

Boro’s only win to date came at Sunderland on August 21 as they took five of the first nine points available on their return to the top flight.

However, the going has been considerably tougher since, with critics questioning the head coach’s team selection and tactics amid a slide down the table.

But, if there is pressure on him, he is refusing to let it affect his life away from the club’s Rockliffe Park training headquarters.

Karanka said: “I don’t want to blame my family for things that happen in my job, so I try to keep it to myself when I am at home and come to my office as soon as possible to try to win the following game.

“It’s my first experience and to go to my office and look at the fixtures and it’s Arsenal, City… I have been working hard to live this situation.

“I trust my work, I trust my players, so we just have to keep going and the day that we are not good enough, we have to change something.”