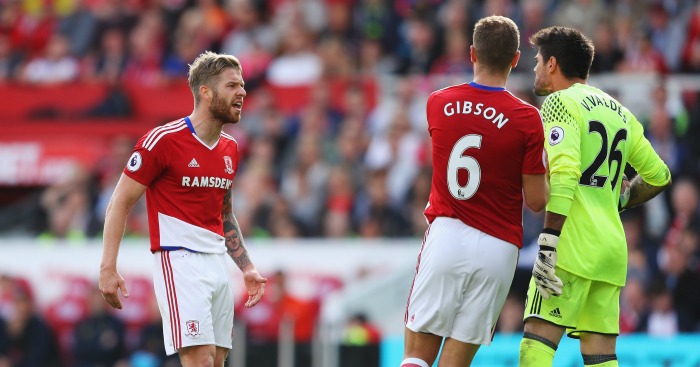 Middlesbrough head coach Aitor Karanka has encouraged his players to vent their frustration behind closed doors after Victor Valdes and Adam Clayton clashed on the pitch.

The goalkeeper and the midfielder had to be separated by central defender Ben Gibson after a frank exchange of views during the first half of last Saturday’s 2-1 Premier League defeat by Tottenham at the Riverside Stadium.

While not condoning the spectacle of team-mates snarling at each other in public,Karanka was not unhappy to see two of his leaders demonstrating their passion, and that is something he wants more of.

He said: “Always it’s positive to argue with your team-mates when you are a leader and when you want to win the games. The only thing is that it wasn’t the place.

“I said after the game that we have a lot of time here at the training ground, we have time in the changing room at the stadium, so I don’t think it’s good for anybody to argue on the pitch.

“But again, both of them showed that they were characters – that’s the kind of thing I want in the team because I can’t be on the pitch, so I need some leaders on the pitch.

“They know they made a mistake, but we showed that everybody on the pitch wants to win the games.”

The defeat by Spurs was promoted Boro’s third on the trot and much of the feelgood factor created from a solid start to the season has dissipated ahead of Saturday’s trip to West Ham.

However, Karanka remains confident that his team can more than make a fist of it in the Premier League, and he has been boosted by the news that skipper Grant Leadbitter could be back in action sooner than expected.

The 30-year-old midfielder underwent hernia surgery during the summer, but follow-up scans showed the damage was more extensive than first thought and Boro feared he could be sidelined until Christmas.

However, Karanka has revealed that Leadbitter could return to the fold within weeks.

He said: “He’s improved a lot in the last two or three weeks, so hopefully sooner than we thought, maybe two or three weeks or maybe a month because at the beginning, we were expecting maybe Christmas, so we are positive now.

“But again, these kind of injuries, you don’t know.”