Home All The News Karanka: We must continue to believe in ourselves 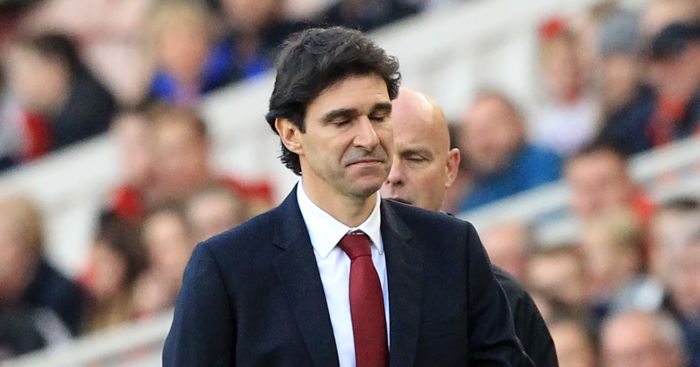 Aitor Karanka has urged his Middlesbrough players not to lose belief that they can hack it in the Premier League after a demoralising home defeat by Watford.

Jose Holebas’ stunning 54th-minute strike proved decisive as the Hornets ran out 1-0 winners at the Riverside Stadium on Sunday, in the process condemning their hosts to a fourth defeat in five league outings and a third successive loss on their own pitch.

Karanka said: “I know for everybody it is not a nice moment, but we are in the Premier League, we are in October, so we have to be positive because we have a strong group of players, so we have to keep going.

“If we don’t believe ourselves, who can believe in us?”

Boro created little of note despite enjoying the better of much of the game, and their fans among a crowd of 28,131 left for home furious that referee Roger East had waved away four penalty appeals, some more ambitious than others.

Karanka was concerned at the lack of opportunities, but also accused Watford of time-wasting as Boro tried to fight their way back into a game which was extended by six minutes.

He said: “We played really well for the first 30, 35 minutes. We had chances to score, we didn’t score and in the second half, we conceded that goal and after that, it was impossible to play.

“You saw that they have more experience than us and in the second half, it was impossible to play because the ball was more time stopped than playing.

“We don’t know how to play in that way.”

Opposite number Walter Mazzarri, who was left to wonder how Boro defender Antonio Barragan escaped a second yellow card, was mystified by Karanka’s claim.

The #watfordfc players celebrate today's win with their superb travelling support at the Riverside! ?? pic.twitter.com/6aGvknrxXh

He said: “I don’t know, honestly I don’t think so. [Miguel] Britos was injured and of course if somebody is injured, he’s on the floor and he waits for the medics to come.

“I don’t really know what he’s referring to, but honestly I don’t think so.”

Watford have now won three of their last five league games and are easing themselves up the table after a challenging start to the campaign.

However, asked if they can target a top-10 finish, Mazzarri said: “I have told my players that we need to focus game-by-game. I don’t put myself any limits on what we can do this year, but I don’t want to look at the league table now.

“It’s important that we correct the mistakes that we do every game and look game-by-game to see where we can get.

“I am very happy about the result. It was very difficult to play in a stadium like Middlesbrough where they had the whole crowd on their side and they pressed for the whole game. They are a very organised team.

“On the performance, it was very good defensively, but I think we can do better in the overall performance of the game – we have done much better in other games.

“We played better in the games before this, except for Burnley.”