Ole Gunnar Solskjaer stuck by his man for their 1-1 draw against West Ham in midweek. 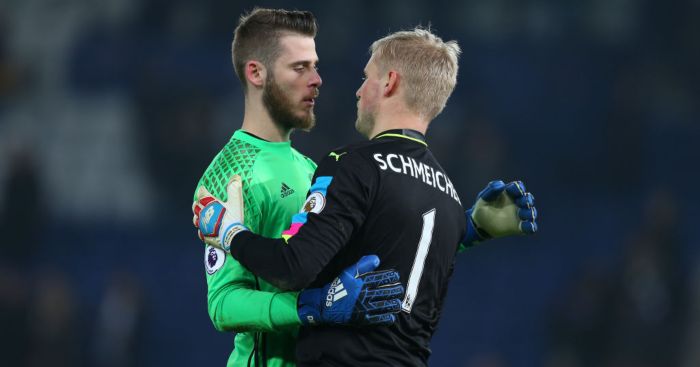 Just a month on from Ole Gunnar Solskjaer lauding the 29-year-old as the best in the world, the Red Devils’ goalkeeping dilemma increased after the Spain international cost his side a shot at FA Cup success last Sunday.

De Gea did not cover himself in glory for Olivier Giroud’s opener and was guilty of a shocker as a long-range Mason Mount strike somehow beat him, putting Chelsea in control of a semi-final they would win 3-1.

Solskjaer stuck by his man for their 1-1 draw against West Ham in midweek and he’s likely to keep his place in the side for the trip to Leicester on Sunday.

However, that hasn’t stopped criticism from some pundits and Schmeichel says he feels sorry for his fellow goalkeeper.

“It can be very difficult and you’ve got to remember, and this is with absolutely no disrespect to journalists or pundits, but you’ve actually never stood in that goal.

“You would classify things as mistakes or errors, and there are things that are glaring sometimes, but often this narrative can be created around a goalkeeper because it’s the pundits and journalists’ job to educate and that’s their job.

“They’re telling their educated opinions about goalkeeping, things like hand positions, feet positions, technical things which sometimes is quite damaging to a goalkeeper.

“You hear comments like, ‘going with the wrong hand’, or other throw away things that they’ll say which will make the consumer or viewer think, ‘oh yeah, that’s right, I see he’s done it again’.

“That’s sometimes quite a dangerous narrative because all of a sudden it starts building momentum and for someone like David, I really feel for him because he has been unbelievable for so many years and every goalkeeper goes through periods [of poor form].

“There is a lot of pressure also in the sense that you now have an England goalkeeper coming through and, like it or not, in this country when you have an English goalkeeper, that means so much and they really do tend to build them up.

“I genuinely hope for someone like Dean Henderson, who’s had an amazing season, that he can be allowed to develop. I hope for him, he gets another season, maybe two at Sheffield United and play the way he’s done and then he’ll be ready.”