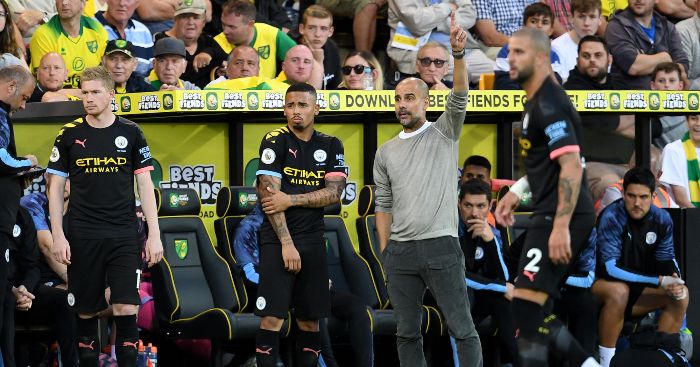 City have been unable to keep the pace with Liverpool’s perfect start to the campaign, with the champions dropping five points in as many games.

The draw against Tottenham was compounded with the shock 3-2 defeat to Norwich that already leaves them staring at a sizeable gap to the top. Pep Guardiola even congratulated Liverpool on winning their first title since 1990. He’s a good lad.

But De Bruyne knows that City closed an even bigger gap to eventually win the title last season, so they can do so again.

“Last season we were seven points behind – it happens,” he said.

“Of course we want to win every game but it is difficult. You have to respect the other team and when they do well. They do well and that is it.

“It will be tough, the next seven months, like last year. It never stops. It is our job and sometimes it is hard but you have to take it on the chin.

“We lost four games out of 38 last season and that is a good record. We can still win this season with the same points at the end of this season.”

The Belgian was also at pains to point out that the defeat was not down to the fact he did not start.

“We’ve got so many games going on so sometimes he [Guardiola] is going to make a change for whatever reason, you just have to take it and then if you can help the team,” he said.

“You know there’s no point in saying I’m on the bench so we lost – that’s not the reason.

“You know it’s going to be a difficult task at 3-1. I tried to help the team but it wasn’t enough.

“I think we put a little pressure on them but I think they defended really well so in the end we scored too late.”