Home F365 Features Kean to go: Five imports who cut and run after a year… 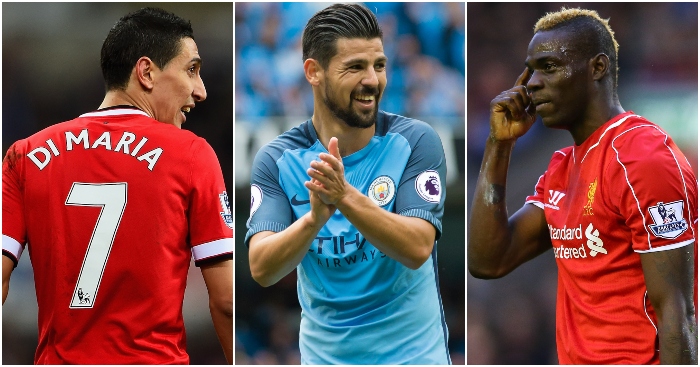 If Moise Kean doesn’t yet regret his Everton move, his father certainly does. He wouldn’t be the first big signing to make a swift return to Europe…

Angel Di Maria (Manchester United)
“United is the only club that I would have left Real Madrid for,” said Angel Di Maria upon moving to Old Trafford in 2014 for a British record transfer fee of £59.7million. But judging from the haunted expression he sported for most of the year he spent in England, the novelty quickly wore off.

Di Maria was a disaster at United. Two goals and another couple of assists in his first four games under Louis van Gaal was a splendid start but his form dropped off a cliff after a hamstring injury shortly after his arrival. “Talented, but a complete fanny,” was how one former team-mate described Di Maria and that was the view too on the terraces.

Less than 12 months and only three goals into a five-year, £200,000-a-week contract, Di Maria was grabbing the bags he probably had packed for months and hauling them to Paris. Recouping £44million of the fee United paid Real remains one of Ed Woodward’s finest achievements, though he was lucky to do business with perhaps the only other club with more money than sense.

Mario Balotelli (Liverpool)
Even Brendan Rodgers couldn’t grit his shiny new teeth and smile at the sight of the Italy striker walking into Anfield in 2014. That is perhaps because the Liverpool boss had earlier that summer insisted that he would not be signing the former Man City bad boy: “I can categorically tell you Mario Balotelli will not be at Liverpool.”

Three weeks later, Rodgers failed miserably to put a positive spin on the turn of events: “Time will tell. Of course it is a risk. I am not going to say it wasn’t but he knows he needs to fit into our culture.”

Indeed, time did tell; the risk backfired; and Balotelli made little effort to fit into Rodgers’ culture. He scored as many Premier League goals as FA disciplinary charges in his one year at Liverpool before being shunted back to AC Milan on loan. When that ended, Jurgen Klopp had no use for Balotelli so he was given to Nice.

Rodgers admitted after he had been sacked that Balotelli had been thrust upon him by the club: “They were thinking that maybe he is a £50m player that we can get for £16m,” Rodgers said. “The huge blow for us was we felt we were getting Alexis Sanchez. We thought Luis Suarez was going and he would have been the like-for-like replacement. He would have been perfect for us.”

Helder Postiga (Tottenham)
“He is a player who will definitely add striking quality to our squad and is a young player of proven ability,” said Glenn Hoddle immediately after Spurs committed to paying up to £8.25million for a player who definitely did not improve his team. “I’m sure the supporters will enjoy watching him over the coming seasons.”

Wrong again, Glenn. Not only because Postiga was painful to watch but because he only lasted a year of the five-year deal he signed in 2003 when he moved to White Hart Lane as a 20-year-old from Porto.

Postiga scored a single league goal in his only season at Spurs before Porto offered to take him back for a few euros and Pedro Mendes. Spurs sporting director Frank Arnesen explained Postiga’s failure. “There is no doubting Helder’s ability, but maybe he came to the Premiership too soon. He was keen to return home and, although we rate him highly here, we did not like to see him unhappy.” That’s nice of them, isn’t it?

Nolito (Manchester City)
“My daughter’s face has changed colour – it looks like she’s been living in a cave,” said Nolito after just a year in Manchester. To be sure the message was clear, he continued: “I want to leave. I haven’t played in six months. I have learnt very, very little English – it’s very hard. Just ‘tomorrow’, ‘good morning’, ‘good afternoon’ and a little more.”

The first problem there might have something to do with the second, fella. Nolito was one of Pep Guardiola’s first signings as City boss when he joined from Celta Vigo in a £13.8million deal to be reunited with the former Barcelona coach. But four goals and piss-poor performances led to the then-29-year-old not starting a league game after the turn of the year.

He was sold to Sevilla for less than £8million but only after he tried to deny that being caught in the company of the Spanish club’s sporting director Oscar Arias was anything other than a coincidence. “I was just casually shopping for clothes for my wife in Seville,” he said. “I went to get a coffee and bumped into Sevilla’s director of football casually.” Just casual then.

Nolito has been spotted in Sevilla alongside new Sporting Director of the club, Oscar Arias. Source: (Mundo Deportivo) pic.twitter.com/nRv5U3yZfW

Mateja Kezman (Chelsea)
“I’ve got the best record in the history of PSV. I just need some time and supporters need to be patient, but I’m sure it’ll be okay.”

It was not okay. Nor did Kezman get much time. The Serbia striker scored 66 goals in 62 league games during his final season at PSV Eindhoven but after joining Jose Mourinho’s Chelsea for £5.3million, taking Jimmy Floyd Hasselbaink’s No.9 shirt, Kezman could only manage four Premier League goals.

Chelsea snapped Atletico’s hand off when they offered the Blues their money back a year later. Not that Kezman regrets moving to Chelsea. Quite the opposite.

“Chelsea was the best thing in my career,” he told Sky Sports. “That was the climax of my career, for sure. Living and playing in London was something that I will never forget. I don’t know if I made a mistake because I moved away so quickly. Maybe I do and maybe I don’t regret it, but I always believe in my decisions. But the transfer to Chelsea made my dreams come true. That was the best thing that ever happened to me.”

Without a stunning turn of events, it’s hard to imagine Kean reflected quite so positively about his time at Everton.