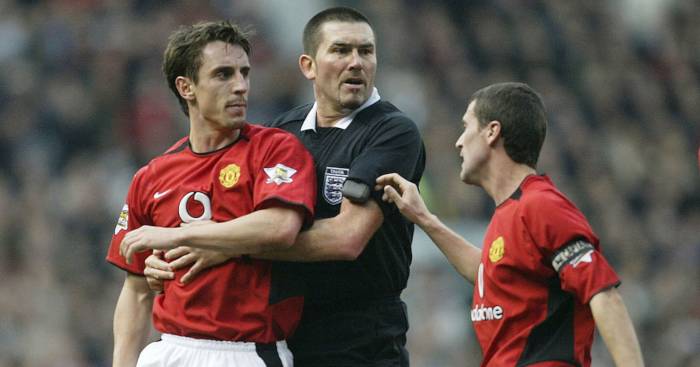 Roy Keane and Gary Neville took part in a heated debate over Manchester United’s performance in their 2-0 loss to Manchester City on Wednesday night.

Second-half goals from Bernardo Silva and Leroy Sane took City back to the top of the league with a derby win, one point clear of Liverpool with three games left to play, and highlighted the gulf in class between United and the Premier League leaders.

Solskjaer won 14 of his 19 games while in caretaker charge of the club, but it is now five defeats in seven since he was handed a three-year contract, highlighting the scale of the rebuilding job ahead in the summer.

However, Neville reckons United gave as good as they’ve got against City at Old Trafford.

“City in the first half an hour was as sloppy as I’ve seen them,” Neville said. “They set such high standards, it’s about precision, quality of passes. United played a decent game. That’s as good as United have got.

“That’s that team!’ Neville quickly fired back. “What we saw there tonight between United and City was the gulf in class between the two teams.

“I think that’s everything United have got. I don’t think I looked at any player on that pitch and thought they could’ve given more. That’s what they are. De Gea to be fair, he’s not normally like this.”

Keane and Neville were part of a four-man panel on Sky Sports with Graeme Souness and Joe Hart the other two pundits involved in the assessment of both side’s performances.

Getting increasingly frustrated with Neville’s assessment, Keane added: “You’re saying they gave it their all. That’s cheating, what’s (Fred) done is cheating, letting the guy run off him.”

To which Neville replied: “I think that’s what (Fred) is. Defensive wise he’ll skip into challenges, he’ll get beat, people will go past him. Sometimes he’ll win it, sometimes he won’t.

“Watching Fred all season, he commits to challenges, he gets skipped past and he can’t get back, he can’t recover, he’s not got the legs. I think that’s what he is.

“There’s nothing I’ve seen from United that makes me think they could’ve given more. They could’ve not made mistakes, but that’s the best they’ve got I think.”

Neville’s attempts to defend Fred’s limitations only seemed to anger Keane even more, especially as the Brazilian is a midfielder, a position Keane knows all about having played there himself.

“Look Gary, they’re strolling across! Fred sells himself short here. He gives the ball away, which can happen, then compounds it. You do not let (Raheem) Sterling then get goal side of you. Why aren’t people trying to stop the shot?

“If that’s a player giving it their all, then Manchester United are in even more trouble than I think, and I think they’re in huge trouble.”

Neville attempted to argue that United’s players had been “run into the ground” ahead of Fred’s mistake but Keane was having none of it.

“Oh Gary Gary, it’s two yards man,” Keane interjected. “I guarantee if you’d done the same, do you think we’d be telling you off? Of course we would!

“It’s two yards! At least close it. The guy gets the shot away. Get out to him like your life depends on it!”