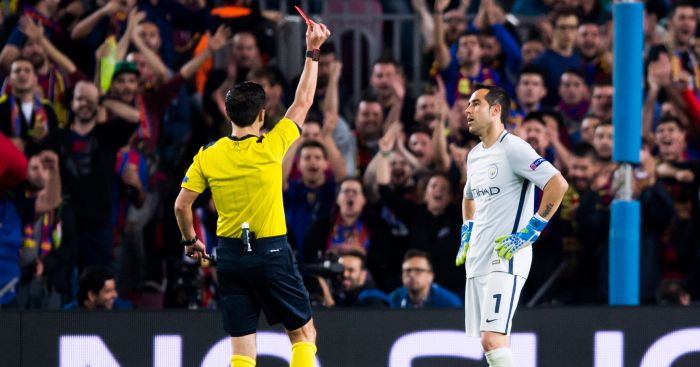 Roy Keane has criticised Claudio Bravo’s “decision making” after the goalkeeper was sent off during Manchester City’s 4-0 defeat to Barcelona in the Champions League on Wednesday night.

Bravo, who joined City in the summer from the Catalans, received a straight red card on 53 minutes for handling Luis Suarez’s goal-bound effort outside the box after the Uruguayan had intercepted the keeper’s poor pass.

City were 1-0 down before Bravo’s sending off but went on to concede three more goals as they fell five points behind Barcelona in Group C.

“I’ve never read or heard so much about a goalkeeper coming to a club about what he does with his feet,” ITV pundit Keane said.

“If one of your defenders does that you’d be critical of them, particularly for your goalkeeper and as I said there’s a time and a place and there’s a time to clear your lines. The decision making was all wrong there.”

However, Keane defended Guardiola for leaving out star player Sergio Aguero against the La Liga champions.

“I suppose so (it was a surprise), your star man and your main goal threat left on the bench. I’m sure the manager had his reasons.

“I don’t think Aguero’s slow but he probably wanted a bit more pace up front.”