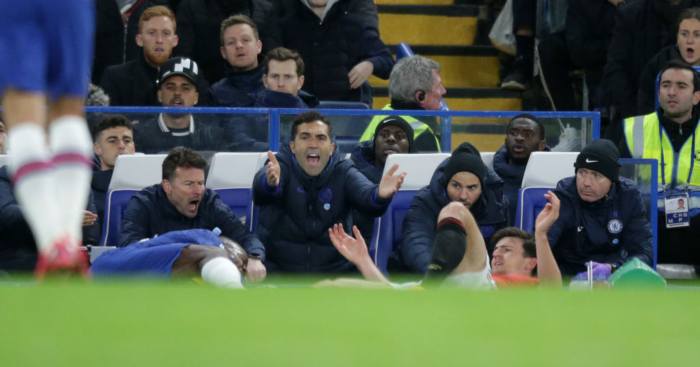 Roy Keane claims Harry Maguire is “a lucky, lucky boy” with the Manchester United captain set to avoid retrospective action for his apparent kick-out on Michy Batshuayi in United’s 2-0 win over Chelsea.

Maguire was spared any disciplinary action in the 21st minute despite a Video Assistant Referee review looking into his incident with the Chelsea forward.

Batshuayi shoved Maguire in the back, causing him to fall to the turf as he ran off the pitch, and he extended his right leg towards the Belgian and kicked him in the groin right in front of the Chelsea dug-out, who were furious.

Referee Anthony Taylor was some way from the collision and so the decision was left to VAR Christopher Kavanagh, who deemed that there was no violent conduct involved and decided against issuing any card.

OPINION: F365 Says: No Frank, Chelsea are not playing well…

Chelsea manager Frank Lampard claimed the decision had a big impact in the way the game turned out, and his feelings were echoed by Keane who believed that Maguire should have been sent off.

“He’s a lucky, lucky boy,” Keane said on Sky Sports. “Maguire, maybe because it’s his personality, a calm lad, but he definitely kicks out.

“His personality helped him, he comes across as a decent guy, it’s a decent excuse, but he’s a lucky boy.”

Carragher agreed with Keane and questioned the consistency of such VAR reviews after the same referee sent off Spurs forward Son Heung-min earlier this season for a similar offence.

“I think it’s a red card. The referee can’t see it, that’s got to go to VAR,” Carragher said.

“It’s the inconsistency that frustrates people. It’s not gonna go away, different people using it. But Harry Maguire’s a lucky boy.”