Home All The News Keane on Henry handball: F***ing hell, move on 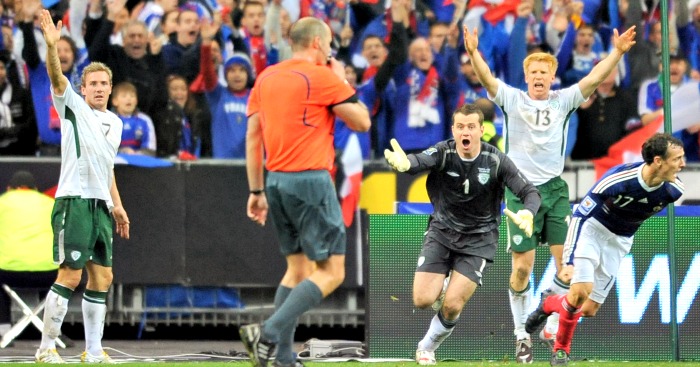 Robbie Keane will not cast his mind back to Thierry Henry’s controversial handball for one second as the Republic of Ireland attempt to dump hosts France out of Euro 2016.

Keane was part of the Ireland side which suffered World Cup heartache at the Stade de France in November 2009 when Henry’s illegal act went unnoticed by the officials and William Gallas levelled on the night to deny the visitors a penalty shoot-out and a lottery ticket for a trip to South Africa.

Wednesday night’s dramatic 1-0 victory over Italy at the Stade Pierre Mauroy handed them a reunion with Henry’s compatriots in Lyon on Sunday, and revenge was very much in mind as delighted supporters headed off to make yet more travel arrangements.

However, 35-year-old striker Keane was not having any of it.

“Wouldn’t it be great in the home country to knock them out?”

Keane has for so long been at the centre of the Republic’s big night, but he, along with Shay Given and John O’Shea, a trio which boasts a combined total of almost 400 caps, were spectators as a new generation of heroes took a much-changed Italy side to task and eventually ran out winners courtesy of Robbie Brady’s 85th-minute header.

The thousands of Ireland fans who had made it into the stadium almost lifted off the roof, which had been closed to protect a pitch which was due to be ripped up and replaced today after adverse weather in northern France left it in a poor state.

Keane said: “It’s a special moment for the country and for the players, and certainly for Robbie Brady, who came up with a magnificent goal.

“It was something that we deserved. We deserved to win the game. We were the better team throughout the whole game.

“When you’re a playing a good team like that, they are going to get the odd chance here and there. In the second half, they hit the post but apart from that, they didn’t do too much.

“We defended well. We got in their faces and we made it hard for them and we got our rewards in the end.”

Brady’s goal came seconds after substitute Wes Hoolahan had passed up a chance to win it himself after going none-on-one with keeper Salvatore Sirigu, but he redeemed himself when he floated the ball into Brady’s path and the winger, who started the competition at left-back, applied the finish.

Keane said: “Robbie came up with the goods. I said to him after the game to enjoy this moment because they don’t come around very often and when they do, it’s some experience.

“I told him to take it all in and enjoy every minute of it, and I think he’s doing that. He’s been brilliant in the last three games. It’s not easy when you’re going from left-back and getting moved around and playing in midfield.”