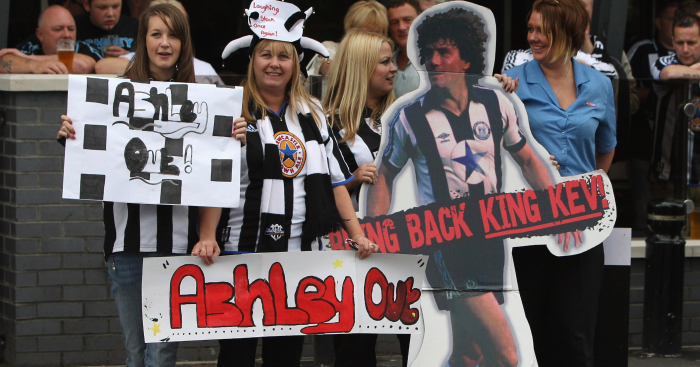 Unlike so many others around the club in recent years, Kevin Keegan never disappoints the Newcastle fans. King Kev has kept largely shtum since he left the club in 2008 but their former player and two-time manager isn’t holding back now his autobiography is just days from release. The Toon Army hoped his tome would offer a cache of ammunition to use in the fight against Mike Ashley and his minions; their wishes have been granted.

‘I don’t want to share my oxygen with these people,’ Keegan writes, still simmering over his last exit from Newcastle and the mismanagement of the club before, during and after his departure. ‘They are a real one-off,’ he elaborated with The Guardian. ‘I don’t know of a club that has been run as badly or with such disregard for people.’

It doesn’t take someone with Keegan’s level of insight into Ashley’s regime to see that the owner is running a great institution into the ground. Two relegations during his 11-year tenure tell their own stories and having been sold down the river for more than a decade, Newcastle fans have tried everything to shift Ashley’s regime. Almost everything.

The supporters’ current approach is to cling to Rafael Benitez in the vain hope that the manager can effect change from the inside. The Spaniard is the first manager since Keegan with the necessary backbone to stand up to Ashley, but even he lacks the necessary clout.

After a summer during which the former Liverpool, Chelsea and Real Madrid coach was denied the basic tools to do his job, Benitez is reportedly preparing to be lied to once more. This week, the manager and his scouts will sit down with Lee Charnley to be asked what resources he feels he needs in January, doubtless to be spun along again until it is too late to do anything other than make do and mend.

Ashley is playing a dangerous game – the kind from which he seems to get his kicks. Ashley’s justification for making a £21million profit in the market during the summer, despite previously promising Benitez “every penny” of money raised from sales, was because of his reluctance to back a manager who refused to extend his contract beyond the end of the current season.

Benitez would never commit under current conditions so he and Ashley remain trapped in a marriage of convenience until next summer. Neither will forfeit the cash required to proceed with a separation and Benitez does not want a relegation on his CV that will doubtless find its way around top clubs across Europe in the not-too-distant future. So they will co-exist until they don’t have to.

You can be certain that Ashley will select his next manager with greater diligence and be careful not to employ someone who will ask too many questions. Benitez was recruited only when Ashley was cornered by the looming threat of relegation once more. Now the owner has seen his club bounce back from the Championship at the first time of asking on two occasions, Ashley will probably feel more at ease with the prospect of demotion because – as he sees it – the return trip is cheaper than paying to move forward.

It leaves Newcastle fans facing the prospect of another Alan Pardew – someone simply happy with the opportunity to call themselves manager of a club which pulls in 52,000 every week, rather than one who realistically believes they can bring that crowd to its feet for anything other than another early dart to miss the queue for the Metro.

If, or rather when, Benitez goes and Newcastle fans lose their biggest ally, where do they go next? It’s been a decade now since Keegan’s last exit, prompted by the shenanigans of the ‘cockney mafia’, and 10 years since Ashley first put the club up for sale, something he has done three times and reneged on twice.

Without the most unlikely of epiphanies prompting a radical change of approach from Ashley, Newcastle and their fans are in a bind. The Toon Army continues its protests outside Sports Direct stores in the city before they march en masse up to the Cathedral on the Hill but as long they make that journey, the initial protest is toothless. The only option remaining is a boycott – an organised, unified, mass no-show at matches. It’s an unthinkable notion to most Geordies, especially the thousands who have forked out for season tickets, reared with the belief that you back your team no matter what, but what other avenue do fans have to make their point known and make an actual difference?

Perhaps if it was believed that a boycott would achieve its mission, it would have been done by now. And that’s the scary prospect for the Toon Army: if they don’t go, it could have no impact on Ashley other than to further fuel his apathy for their feelings.

The owner has demonstrated that he will only leave the club with his money and on his terms. The level of interest has not been satisfactory with a full stadium; an empty arena would only make potential investors even more wary of Ashley’s inflated numbers. And as bad as Ashley has been for the club, he could yet get worse if he is backed even further into his corner.

In Ashley’s letter to the secretary of state for Digital, Culture, Media and Sport in which he complains about his portrayal as ‘a pantomime villain’, the owner put the value of the interest-free loans he has made to the club at £144million. For Newcastle, the worst-case scenario could involve Ashley calling in those loans while stripping the club of its other assets.

Newcastle fans may find it hard to believe but perhaps it has to get worse before it gets better. Many laughed at Sunderland as Ellis Short took them down to League One but plummeting so far prompted a change in ownership during the summer when Stewart Donald took over. That deal relied on Short clearing £125.7m of the club’s debt – and Ashley would almost certainly not be willing to demonstrate similar goodwill – but the mood on Wearside has certainly changed for the better. Not that trophies or European football are suddenly on the Sunderland horizon but the club has re-engaged with its community. A few miles up the A19, that relationship still remains a one-way affair.

Ashley has demonstrated that he has no intention of meeting anyone halfway, and Keegan’s words will have barely registeedr with the man who cares not one jot for his image or how he is perceived by the public, in Newcastle or anywhere else. Benitez is powerless to force Ashley’s hand and in the current state of flux, so to are the supporters.

To get rid of Ashley, it may take something deeply unpalatable to supporters: abandoning their club for the greater good while standing back as the owner ransacks the club to leave the Magpies on their knees. The only thing we know for sure is that they are strong enough to eventually get up on their feet and fight once more.