Home F365 Says Keepers of the void: How to cope before and after a mistake 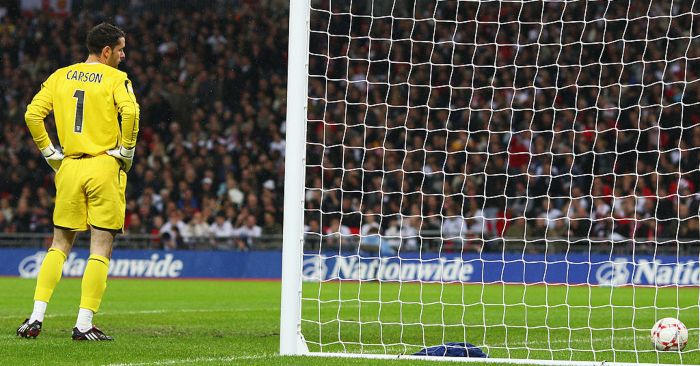 It’s funny to think of any part of the football landscape as being uncovered. To an extent, though, goalkeepers do remain in that black spot. Very few are employed as pundits, there’s a dearth of specialist analysis, and while the vocabulary around other positions continues to develop, descriptions of goalkeeping performance still rely on a tired network of clichés.

That’s probably because of a lack of interest. Or, at least, an absence of relatability. So few people have any direct experience of the position that we’re content to let it dwell in its binary world. Either a goalkeeper makes a save or he doesn’t; end of. But because of that mystery, the position’s hidden depths are fascinating. The training disciplines have their own idiosyncrasies – parachutes, mini trampolines, inflatable mannequins – but the invisible challenges are more interesting still.

Particularly form. This column is being prompted by Jack Butland’s recent struggles at Stoke. Prior to the international break, the mistakes were tumbling out of Butland’s game and footage of each one would be piped mercilessly across social media, to such an extent that the only plausible reaction is sympathy. Butland looks so broken. He looks so helpless that nobody with any compassion could laugh at his plight.

There’s a passage in Michael Calvin’s The Nowhere Men during which a young Butland, then on-loan at Cheltenham, is being watched by a group of scouts. The author is embedded with them when, after a minor error in the first half of a game, Butland lets a soft shot through him and into the net:

‘The mental degradation was almost complete. Butland’s inner turmoil began to affect his kicking. Usually it was one of the better elements of his game; he was comfortable on the ball, which he struck with a languid grace, and evoked comparisons with a finely-honed golf swing. Now he began to unravel technically. He was slicing his clearances and goal-kicks with the undistinguished desperation of a weekend hacker. It was no real surprise when, midway through the second half, Butland dived over a straightforward 20-yard shot.’

Maybe the snowballing effect described is a situation unique to goalkeepers. It’s not unusual for a forward to snatch at a chance and then keep missing thereafter, but the turmoil for goalkeepers seems so much more obvious.

Butland is smart. He did very well in his GCSEs and, most likely, is more prone to the kind of erosive self-analysis which makes adversity harder to overcome. But there are very few goalkeepers for whom a mistake isn’t a harbinger of further doom.

Currently, Dave Beasant’s notoriously terrible performance against Norwich in September 1992 is doing the rounds on Twitter. Beasant conceded three goals at Stamford Bridge that day and the first and third are, honestly, still very difficult to watch. They’re not mistakes, they’re howlers and as inexplicable as they are, the first still makes the second seem inevitable. A ten-year old park goalkeeper wouldn’t have conceded the first yet, because Beasant does, the third – which passes like a hologram through a shadow – becomes an entirely plausible error for an FA Cup-winning professional to make.

Why? Because there’s a before and after with goalkeepers. In Beasant’s case, that was confined to a single game. In many others, it’s a dividing point between two halves of a season or career. The time prior to a big mistake, when the player had one kind of reputation; and then the after, when his fragility not only instructs the perception of him, but appears to redefine how he thinks of himself and how he performs. Like a boxer, before and after he’s been knocked out for the first time.

Nobody exemplifies that more vividly than Rob Green. And nobody would wish what happened to him on anyone. Nine years on from Rustenburg, though, there’s enough perspective to say that his reputation was never the same again. A high-profile error can stay with a goalkeeper irrespective of what happens next – that’s certainly true – but Green wore the wounds of that World Cup in a way which made it impossible to forget about.

He still had good games, he still made excellent saves, but it was as if he’d been infected by something which couldn’t be cured. Norwich supporters will remember that he had ugly moments when he was a young player, so it could argued that he always possessed that error gene, but – inarguably – West Ham sent one goalkeeper to South Africa in 2010 and got a completely different one back.

Put it this way: would post-World Cup Rob Green have had the winking hubris to stitch “England’s No.5” into his gloves?

Scott Carson was really the same. There were more mitigating factors for his mistake against Croatia, because that was an awful pitch made worse by dreadful conditions, but his England career began and ended on the same rainy night. In the years after, it was less like he had suffered a major devaluation and more as if the original version of him died. It became his immediate association. He’s still playing now, still just 34, and any time he appears on television or his name is read over the tannoy, everyone thinks of the same few seconds.

Krancjar shaping to shoot. The ball ricocheting off his shoulder and then lolloping into the Wembley net.

Imagine that. Imagine have to live with it – not in the weeks and months afterwards, bad as that would be, but in the minutes before leaving the pitch. That must always be the worst. Waiting to get back into the dressing room. Feeling worse for your family if they’re sat in the stands. Your mum, crying because she can’t do anything to help you. Realising that you’ve taken up permanent residence in the parts of the internet where nobody ever wants to see their name.

Imagine all of those thoughts clattering about your mind and still having to keep goal in front of a television audience of millions.

And what is the way back from that kind of trauma? A theory, which is certainly applicable to Butland at the moment, is that correcting form or recovering emotionally from a bad mistake is different for goalkeepers. A forward needs a goal, a midfielder needs a couple of good passes and a ripple of applause from the crowd, and a defender just needs to thunder through the back of a centre-forward. Little moments might not bring a permanent change in trajectory, but they certainly alter the conversation around a player.

But goalkeeping doesn’t seem to work in the same way. At least, the spectre of an error looms far larger and it haunts more relentlessly. A centre-forward who hasn’t scored for a while may become reticent in front of goal, but the other compartments of his game will generally work as before. He can still press, he can still pass. For a goalkeeper it seems to become a more general ailment; the resulting doubt is more pervasive. The consequence seems to be the kind of technical paralysis that Michael Calvin described in Butland – during which every decision he makes becomes harder, every catch more of a trial, and each journey from his line a flirt with disaster.

It could also explain why the road back is so long. Or why, in some instances, players never recover. If a good save doesn’t cure bad form and a single impressive game brings only relief rather than redemption – and we know that to be true – then the path back to goalkeeping equilibrium seems to depend on a long-term, sustained perfection which, for obvious reasons, is incredibly difficult to achieve. Worse still, it’s a journey which those players have to undertake to the sound of chattering denigration and with the knowledge that, somewhere, somebody is still chortling along to their very worst moment, never allowing it fully fade away.

There’s no grand theory, it’s just something to dwell upon. We should be more interested in goalkeeping, primarily because it’s just so compellingly dark.