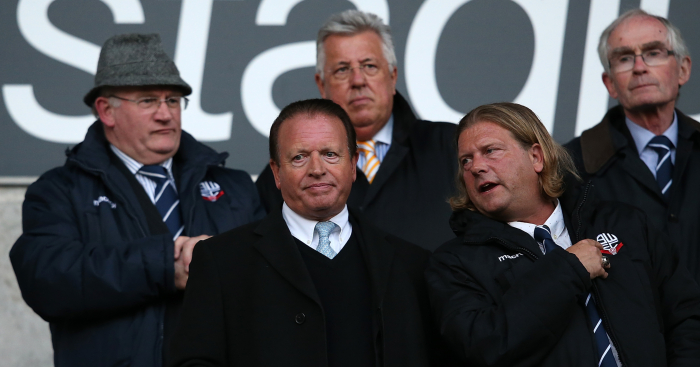 Bolton will have to play their next two league matches behind closed doors after the club’s safety advisory group decided the Championship strugglers could not guarantee fans at the University of Bolton Stadium would be safe.

The safety group, which is comprised of representatives the local council, police and emergency services, informed the English Football League on Tuesday that it has placed a prohibition notice on the club under the Safety of Sports Grounds Act 1975.

The shock news comes a day before the club are due in the High Court, facing a winding-up petition from HM Revenue and Customs for £1.2million in unpaid tax and other debts.

The whole place is a sh*tshow, basically.

The club told the group it could not address its concerns until after the court hearing, which gave the safety experts little choice but to rule that all supporters will be prevented from entering the ground for the home games against Ipswich on Saturday, April 6, and Middlesbrough on Tuesday, April 9.

The stadium blow comes only two hours after the latest update from chairman Ken Anderson on Bolton’s website, in which he makes no mention of the safety certificate problem but does urge the players to get back to work after they embarked on a 48-hour strike over unpaid wages.

Staff were not paid on time for the second month in a row, with Anderson suggesting their action will not solve anything.

“Obviously, the players’ decision to go on strike is very disappointing and once again, I would reiterate that in my three years at the club, the staff have only been paid late once and yesterday was only the second time,” he said in a statement on the club website.

“Likewise, the players have also only been paid late three times. The reality is that they have always been paid.

“We are not the only club to have paid players late and there are many precedents of this happening.

Indeed, I was told yesterday that at least at one club, the players were buying their own food and doing their own laundry for many weeks, but to the best of my knowledge, none of the players at those clubs went on strike and let’s remember, yesterday was only April 1st, so it is not as if it is weeks late, is it?

“However, I accept that two wrongs don’t make a right and everyone should be paid on time.

“I have read that the players and management staff have said that being paid late does not actually motivate them to go out and perform on the pitch.

“That is fully understandable, but perhaps they could also explain why the results up to Christmas were not exactly impressive either?

“That all said, l have to apologise to all the non-playing staff for the delay in paying their salaries and whilst there are sufficient funds in the club bank accounts to pay them, it is not currently possible until after April 3 for legal reasons and l sincerely apologise to everyone unreservedly for this and would again request their continued patience during these difficult times .

“Fortunately, they did not choose to go on strike and their loyalty to the club cannot be questioned, unlike the players’ decision, which unfortunately has a negative rather than a positive logic behind it.

“I am not quite sure what the players think striking will achieve.”