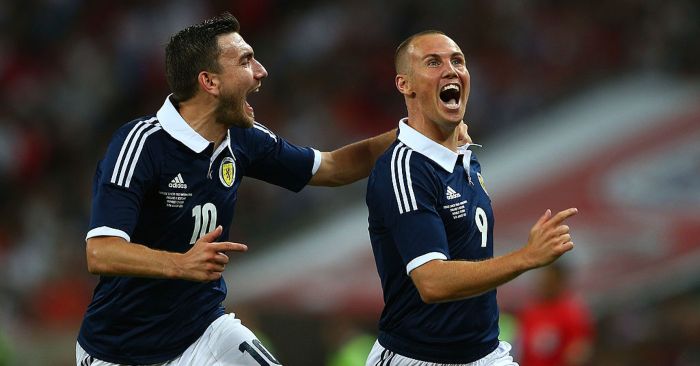 The very definition of the journeyman who was awfully reluctant to hang up his boots, going so far as to resign as player-manager of Livingston when the club wanted him to retire from playing to focus on management, simply because he wanted to keep on playing.

Especially admired at Wolves and Rangers for whom he scored lots and lots of goals, often in crucial games. Indeed, he was very much your man for an important goal against a big team.

No-one would tell you he was the best striker ever but playing 823 games in your career and scoring 268 goals is a feat of longevity, persistence and determination as much as it is an expression of footballing talent. Once scored five in a game v St Mirren for Rangers.

A shaven-headed warrior for much of his career both domestically and internationally, often wearing an expression of man who is chewing bees, his speciality was working relentlessly on his own up front, sometimes detached from the midfield, chasing down long balls with all the enthusiasm and fury of a whippet running after a ball in the park, which must be one of the hardest and most exhausting and often least rewarding roles in football.

When he played in good teams, he scored a lot of goals, illustrating how much he was reliant on a good service.

What have they done to deserve this then?
Kenny retired this week after an amazingly long career. The fact that this rather surprised observers of Scottish football is testament to the degree to which we have all got so used to Kenny playing for someone. He spoke well about the last 24 years.

“It has been a career far beyond my expectations. I would like to think that I give all young players hope that if you give everything you’ve got in every training session and match you can play at the highest level. I’ve scored goals in the Premier League, Champions League and at international level and you can’t ask for much more than that. Representing my country and pulling on that shirt as many times as I did is the greatest honour any young Scottish kid could have. If you had told me when I was a young boy at Hibs that my career would have gone like I would have laughed at you.”

His last club was Partick Thistle for whom he scored ten goals in 31, which is pretty much his career average, thus he was still banging them in just as he was for Hibernian back in 1998. Throughout all that time he has never changed his haircut. I say haircut because that’s exactly what it is: hair, cut. Until it’s almost not there at all. If you look at a photo of him 20 years ago, he barely looks any different at all. It should be said that he is in tremendous shape, lean and well-defined.

Is he Scottish football’s Jamie Vardy? Vodka and cheap sweets have a lot of fans in Scotland, that’s for sure.

But perhaps the most extraordinary fact about Kenny is that he is one of just five players who have played for both Celtic and Rangers. Not only that, he has scored for each against the other, but has still managed not to be a hate figure for either set of fans. Extraordinary.

That Kenny has emerged from a season at Parkhead and a total of eight at Rangers in three spells without being despised by either side is a credit to his football and attitude.

What we all admire in him is his work rate. He might not have been the finest player who ever pulled on boots but I would wager few have covered as much ground, often in pursuit of lost causes. Even in defeat he never gave up, he never stopped chasing often hopeless balls down, he never stopped believing that the next punt forward might be the one he can get on the end of and score. Yes, he missed as many as he scored and as he ran at goal you were never 100% confident he’d score, but you were always confident he would keep on trying. And, hey, who can gainsay that?

If you look at reels of his goals, he scores every type imaginable. Volleys, long range, tap-ins, one-on-ones, penalties. But one thing stands out: he’s very quick-witted and isn’t one for hesitating in front of goal. One of those players who is probably better off not having time to think about goalscoring and just doing it by instinct instead.

But he wasn’t just a chaser of lost causes; he had skill and vision and was always alert for a chance. Look at how he sends Gary Cahill into another postcode with this cracker against England. And the joy on his face having scored is a riposte to every moody, too cool for school non-celebrator. This is how you do it.

His trophy cabinet is not short of sparkly things, having picked up eight titles and trophies with Rangers, two with Celtic and a play-off winner’s medal for Wolves during a five-season stay which saw him notch 63 in 193. His best scoring season was at Molineux in 2002-03 when he netted 24.

Playing for Scotland upfront is one of world football’s more thankless tasks and is hardly guaranteed to lay on enough chances for you to score a hatful of goals, yet Kenny got 18 in 60 which officially counts as prolific for a Scotland striker. It places him at number four in the all-time list behind Coisty, Laurie Reilly and Hughie Gallacher.

Anyone grumpy about it?
His retirement will make many 30-somethings feel old. He’s the sort of player that has just always been around for most of their lives. And let’s face it, he could probably still do a job in the lower reaches of tiers three, four of five of Scottish football. I, for one, wanted to see him playing for Edinburgh City. Maybe he feels his legs won’t take him where he needs to be any more. A little part of me believes he’ll come out of retirement at some point in the next 18 months to play in a big cup game, possibly for Bonnyrigg Rose or some East of Scotland League side. And if he did, you can be sure he’d get the biggest cheer of the day as he ran out, he’s that well-regarded.

What the people say
I genuinely believe that a player who works hard and runs all day season after season, chipping in with a goal every three or four games, will always win the hearts of all but the most emotionally shallow, money-obsessed football followers. And that’s why so many hold Kenny so close to their hearts. He could never be accused of not working for his wages. And while we’re talking about wages, for most of his career, he will have earned, by football’s standards, modest money. Still very good money, but not the sort of alienating, immoral, greedy hoovering that is commonplace today in English football. That really does stop a player becoming distant and detached from the supporters who are working too hard and too long for not enough. So there were plenty of supportive comments for him and, of course, a lovely

‘He loved, more than anything, pulling on that blue top and would never say no to his country. Young Scots should be the same and look up to him!’

‘Was like lightning for Hibs as a pup, a great striker.’

‘Absolute workhorse. Always worth a starting place for Scotland even with the sitters he would miss as he would keep working to get the next chance. Great pro.’

‘Came into a poor Hibs team that were relegated and played a few games in the first division. However, his pace and finishing were a big plus when we came back up scoring in big games against Hearts, Celtic, Rangers, Aberdeen.’

‘Some incredible goals, some incredible misses but he never gave up or hid and always gave his all to whichever team he played for.’

A haircut so stoically unchanging, he is known by some as the ‘Princess Anne of Scottish football’.

‘Decent striker, decent bloke too allegedly. However this was well disguised under the seething-hardman persona demanded of players of Rangers. He was great for Scotland.’

‘Lightning quick, good with both feet, decent in the air, fit as a flea and clearly totally dedicated. Brilliant career and one the best strikers in my lifetime to play for Scotland.’

‘As a Hearts fan, Kenny Miller played for the three teams I dislike most. I should hate him, but his displays for Scotland and Wolves (often playing up front alone) gave me a soft spot for him. Always the hardest worker.’

Always carried a threat for Scotland with his pace and workrate. As he got older I realised he was actually a no bad footballer too, probably as a result of losing a yard. Seen a montage of goals for Scotland and a couple of big ones in there.

‘Surprisingly, never really *despised* by Celtic fans when he moved over to the dark side. We just thought he was a bit of a plank. Unlike our bitter hatred for Mo Johnston.’

‘Some of his ‘lone striker’ performances have been world class. Gave 100% every time, wherever he played, and played within the spirit of the game. Yep, my kind of player. Good luck, Kenny.’

‘For four days (17-21 Jan 2004) he was the best striker in the world! Will never forget the winner against Utd, or the last gasp equaliser vs Liverpool.’

‘Nesta and Cannavaro were scared of him (OK, a slight exaggeration).’

‘Once saw his credit card get declined at Harvey Nichols Edinburgh. He took the shame and rejection in his stride!’

(Completely normal behaviour, by the way)

What does the future hold?
His seven-game stint at Livingston as player-manager was quite successful and it seems certain he’ll go into coaching full-time. God forbid the striker that doesn’t put in a hard shift under him, though. Players of Miller’s generation are really interesting to follow because they are very much the bridge between old-school football and the modern game. He started out playing a game that – back-pass rule aside – had changed little since the 1970s, but finished in a football culture and with a fitness regime that is a million miles away for those days of steak and milk.

When it comes to coaching this gives him an interesting perspective and an opportunity to mix the hardworking, aggressive, take-no-prisoners values of old, with the holistic, nutrition-based, look-after-yourself culture of now.

A man who is soaked in Scottish football and has been one of its most prominent performers for over two decades, there is no way Kenny won’t be in our Scotia sporting lives for another couple of decades and I bet he still looks exactly the same, even aged 70. Scottish football is famous for producing hard men. Kenny isn’t hard; he’s tough. Tough of mind, tough of body, tough of soul. And tough gets you through life far better than being hard ever does.