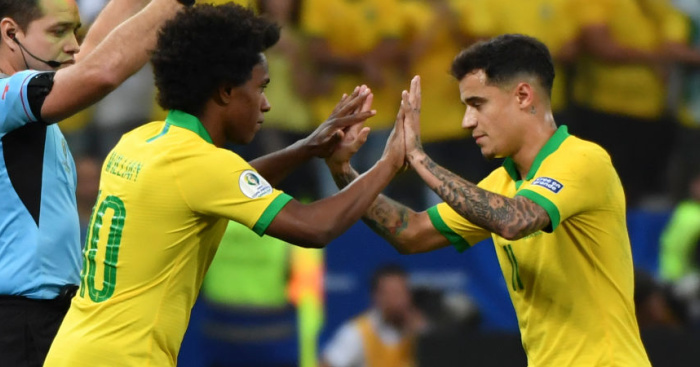 Martin Keown gave a trio of curious reasons why Arsenal were seemingly correct to ditch their interest in ex-Liverpool favourite Coutinho for Willian.

The Gunners are in pole position to land impending free agent Willian once his contract expires at Chelsea.

The Brazilian has been a consistent and capable performer during his seven-year stint at Stamford Bridge, but relations appeared to have turned sour as the end has neared.

With the lure of a three-year contract seemingly the pivotal factor behind Willian’s expected switch to Arsenal, The Gunners have shown faith that he will be able to make an extended impact in North London.

A trio of ‘primary targets’ have since been identified outside of the William move, but Philippe Coutinho no longer appears to be on Arsenal’s radar.

Now, speaking with The Mirror, Gunners legend Keown has outlined three reasons why his former side have chosen the right path to ignore Coutinho – though two of them seem to be a stretch.

“Coutinho has been linked with virtually everybody and seems, if I am honest, a bit unsettled,” Keown told Mirror Sport.

“I think Willian is a safer bet. He’s in the capital, he knows the Premier League very well and he’s a top performer. I think it’s a huge loss for Chelsea.”

While Coutinho has failed to live up to live up to his lofty expectations since his Liverpool departure, the 27-year-old has still showed glimpses of his mercurial talents that typified his rise to stardom in his five-year stay in the Premier League.

Nevertheless, Keown is determined Arsenal have taken the right path in pursuing Willian, adding: “I think that’s a fantastic bit of business. I have always been a real admirer of Willian.

“When I saw what he has been doing this year at Chelsea with his free-kicks and penalties, he’s so reliable.

“He has had his misfortunes with [Eden] Hazard being there. Sometimes he has had to play second-fiddle. Now he is fighting for a place with [Christian] Pulisic.

“I know there is a discussion over two or three years [contract], but I think he would be a really good acquisition for Arsenal.

“He comes in with a wealth of experience and I like his work ethic.

“He is someone who will always give you 100 per cent and the right type of player to go into what is a really young Arsenal dressing room.”