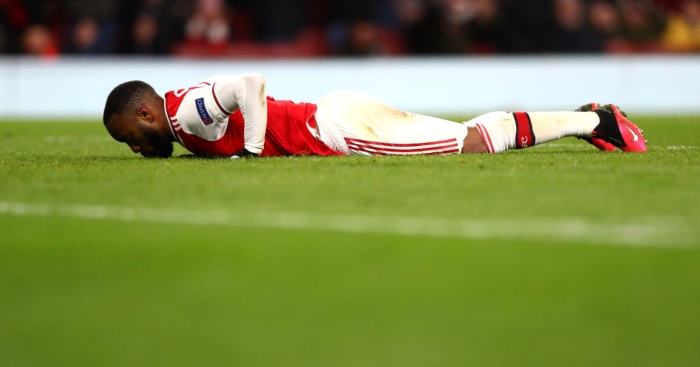 Martin Keown has slammed Arsenal after an “unprofessional” performance as they crashed out of the Europa League to Olympiacos on Thursday.

Youssef El Arabi’s goal in the 119th minute of extra time took the Greek side through to the last 16 on away goals.

With just seconds left of the game, Gunners skipper Pierre-Emerick Aubameyang missed a guilt-edged chance to win the tie, and looked on the verge of tears after the final whistle.

During the 90 minutes, Alexandre Lacazette and Nicolas Pepe struggled to make an impact.

After the game, ex-Arsenal defender Keown told BT Sport: “This is a game that was there for the taking.

“They were complacent in their performance, is it the attitude? Is it the quality of the players?

“It was so disappointing. It was the first time tonight I felt that the players weren’t responding to the manager and the manager didn’t have the answers.

“It was very static, Lacazette was almost a passenger, [Gabriel] Martinelli came on and did exceptionally well. Why wasn’t he on earlier in the match? They left it too late.

“I just feel it was an unprofessional performance, and Arteta will be looking at it now thinking ‘where do I go from here’?

“It’s going to be an uphill battle to make it into the Champions League just in the Premier League.

“There’s going to be quite a fall out from this because Arteta is a young manager, he’s inexperienced with a new set of staff and he’s going to have to build this club back up again.

“If you break down the performance you could look at every single player and say they could have done more tonight.

“Pepe at times his decision making [was poor], that element of his game is going to have to improve massively and I felt that it was almost obvious Martinelli had to come on.

“I was sat close to Arteta, I was tempted to go over and say put Martinelli on.”

Champions League qualification for next season is unlikely with the Gunners on just 37 points, seven behind fourth-placed side Chelsea with just 11 matches to play

For some bizarre reason, the F365 Show still hasn’t been cancelled. So we’ll be back every Thursday with moreirreverent nonsense intriguing insight. Subscribe here.