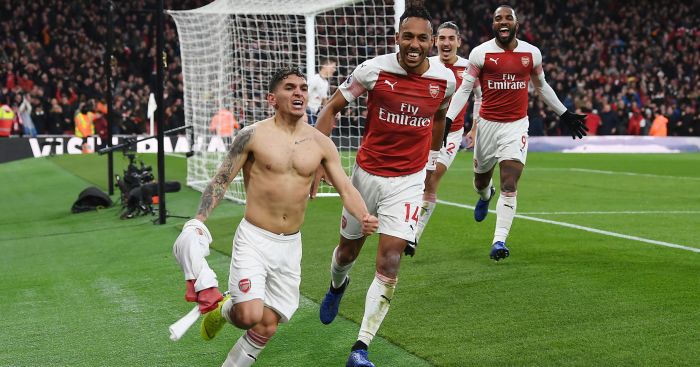 Martin Keown thinks Lucas Torreira’s midfield performance in Arsenal’s north London derby win over Tottenham as the best he has seen since the days of Patrick Vieira.

Pierre-Emerick Aubameyang had opened the scoring before an Eric Dier header and a Harry Kane spot-kick sent Spurs in ahead at half-time.

The Gabon forward went on to equalise, with Arsenal wrapping up the points through Alexandre Lacazette and Torreira strikes.

And the Uruguayan was named man of the match in the 4-2 victory, making three tackles, completing 90 per cent of his passes, while he gained possession 12 times – more than any other player on the pitch.

“He may stand just 5ft 5in tall but that was a massive performance from Lucas Torreira,”Keown wrote in the Daily Mail.

“It was the best all-round midfield display I have seen in an Arsenal shirt since Patrick Vieira and Gilberto Silva used to run the show.

“Torreira and Vieira could not be more different in terms of size and stature but their drive and determination is exactly the same.

“From the first whistle the Uruguayan controlled the midfield. He was utterly fearless, demanding the ball at all times, always eager to snap into tackles and snuff out danger.

“His tireless running gave Arsenal an extra body all over the pitch. You got the sense that if he could, he would happily do everyone else’s job!”