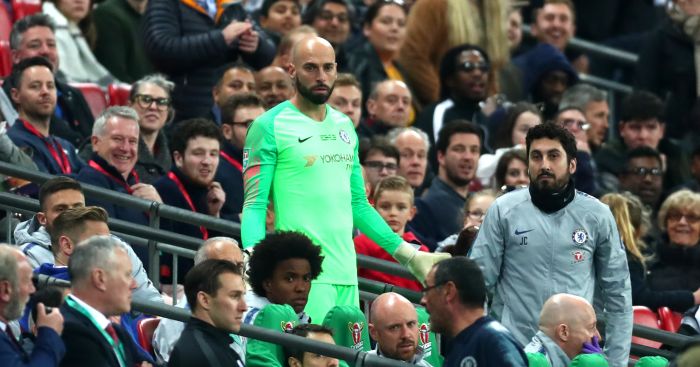 Kepa told Willy Caballero that he was a better goalkeeper than him in a dressing room bust-up after Chelsea’s League Cup final defeat to Manchester City on Sunday, according to reports.

Kepa defied his manager’s orders late in extra time to be substituted after receiving treatment for an apparent bout of cramp, despite the fourth official putting up his number on the board and Caballero being primed to come on.

After the Spaniard, who was within his rights to decline the substitution according to International Football Association Board (IFAB) rules, stood his ground, Maurizio Sarri stormed off down the tunnel, furious that the change was not made.

Kepa and Sarri insisted it was a misunderstanding, but the club announced the 24-year-old would be fined one week’s wages, which would be donated to the Chelsea Foundation.

And The Sun claims that Kepa and Caballero ‘squared up’ in the Wembley dressing room to have a ‘stand-up row’.

The report adds that Sarri and assistant Gianfranco Zola both ‘weighed into ‘ Kepa following the incident that overshadowed an otherwise decent display from Chelsea.

It is unclear whether Kepa will play in Wednesday’s Premier League clash with rivals Tottenham with Sarri admitting he was still undecided.

“I need to send a message to my group, whether Kepa is on the pitch or off it,” Sarri told reporters, when asked if Kepa would start against Spurs.

“I have to decide what is better for my group.”