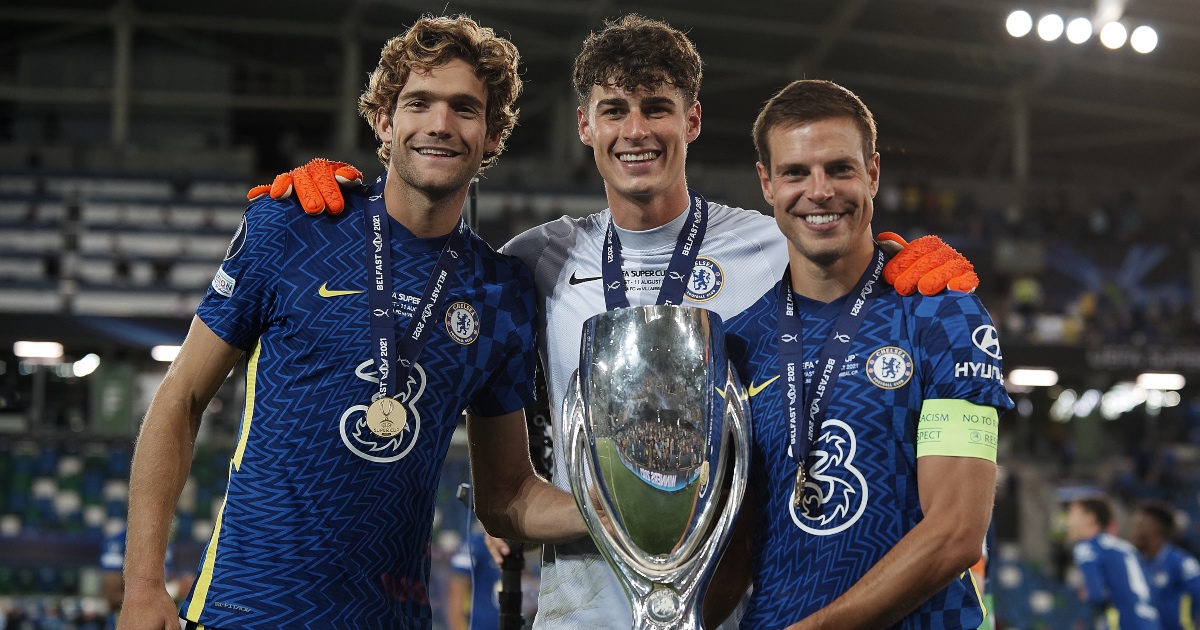 Kepa Arrizabalaga is the hero as Thomas Tuchel trusts the data to win Chelsea the Super Cup.

We were all Kai Havertz as Des Kelly asked him about being the most expensive Chelsea player of all time ten weeks ago. “To be honest right now I couldn’t give a f*** about that. I just won the f***ing Champions League.”

There was never going to be the same outpouring of emotion at the end of a game that – for English teams, anyway – has never really been more than a glorified friendly. But it didn’t feel like one: it felt proper; like it mattered.

The fans were in good voice, both sets of players were doing the sorts of things they don’t when the intensity drops – pressing, counter-pressing, tracking runners, and two of the most animated touchline managers were at their gesticulating best.

That said, we’re not convinced that the reaction of Unai Emery and Tuchel to Antonio Rudiger’s challenge – as he cleared the ball and took a yellow body in the process – would have been any different had it been in a leafier park than Windsor, with jumpers for goalposts.

But their vehemence means we shouldn’t be surprised by the desire and intensity – Villarreal and Chelsea are undoubtedly extensions of their respective managers. Tuchel said, with a face to match, that he would be “angry” if the Chelsea players took the game lightly before kick-off and Emery ensured Pau Torres came straight back from the Olympics, after a 62-game season, to play this match before a holiday. It mattered to them; ipso facto it mattered to their teams.

Both sides had spells of absolute dominance, in the first 30 minutes at the start of each half, first Chelsea and then Villarreal, which culminated in their respective goals.

Marcos Alonso was a constant menace for Chelsea down the left side and Havertz and Hakim Ziyech looked really sharp – switching positions, coming deep and spinning in behind. And it was a great run from Havertz to create the Blues’ opener. Alonso found him off the shoulder of Juan Foyth, before Havertz picked out Ziyech in the box. It was quick and incisive.

It was a real shame to see Ziyech replaced after what looked like a significant shoulder injury – he was as close to Ajax form as we’ve seen him for Chelsea.

Villarreal’s equaliser was wonderful. Gerard Moreno was gifted possession after a poor clearance from Rudiger, popped the ball through to Boulaye Dia, who played a delightful first-time back-heel back into Moreno’s path. And the swept finish into the top corner was as delightful as the build-up.

Chelsea finished the game with 20 shots to Villarreal’s 12 and had 62% possession. But that was due to their dominance in the nonsense that is extra-time in this game (or any other for that matter). Villarreal were excellent in the second half and Chelsea had Edouard Mendy to thank for keeping them in it – he made one particularly outstanding save to deny Moreno a second.

Which made Tuchel’s decision to go full Louis van Gaal and take Mendy off for Kepa Arrizabalaga in the 119th minute even more surprising than for the obvious reasons: Mendy is absolutely massive and a better goalkeeper.

Tuchel said the goalkeepers “have known since Barnsley” – the first cup game of Tuchel’s reign – that the pre-penalties switch was a possibility due to Kepa’s superior stop percentage. The same situation in the Champions League final would have been fascinating. But it was a huge moment for Kepa. A goalkeeper can only be a hero in a penalty shootout and the Chelsea backup is the man most in need of being a hero. The combination of relief and joy on Kepa’s face as he saved Raul Albiol’s effort and was mobbed by Mendy and the rest of his teammates, after what must have been a very tough couple of seasons for a young man, was a lovely moment.

It’s easy to talk of a team’s togetherness on the back of another trophy win, shortly after winning the biggest prize in European football, but it’s hard to ignore when it’s so palpable. With this squad, that spirit and as sure a source of goals as it’s possible to buy right now about to join the club, Wednesday night in Belfast will likely rank low in their list of achievements this season.