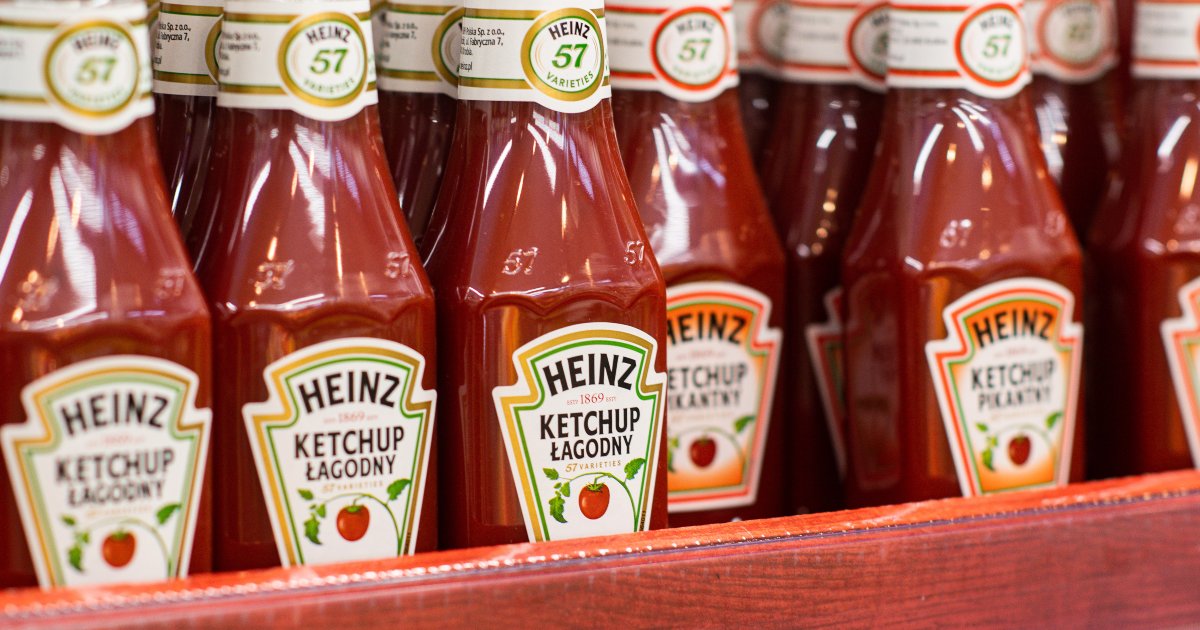 Tomato ketchup is not significantly bad for you; it’s just a very handy way to control footballers.

Is it red sauce, is it brown sauce, or is it no sauce at all?

Recently, there has been another skirmish in football’s tomato sauce wars as Antonio Conte and Steven Gerrard banned the blobby gloop from their players’ tables.

Heinz Tomato Ketchup is massively popular and holds 80% of the market share in Europe and 60% in the United States. Invented in 1876 in Pittsburgh, it’s always been massively popular. In an American Customer Satisfaction Index poll, it ranked higher than any of the other big brands such as Coca-Cola, Nestle or Manchester United.

In 2019 Heinz released a limited ‘Edchup’ version in a tie-up with uber-wealthy balladeer and turnip impersonator Ed Sheeran, who loves the sweet blobby dollop so much he has it tattooed on his arm. I didn’t make this up.

It’s primary use is to simulate blood in amateur dramatic plays. It is also the primo condiment with which to cover up the taste of things you don’t like. Apparently, no footballer’s life is lived to the full without it.

Oh and there are not 57 varieties of Heinz products – there are far more – but they just made up 57 to mess with our heads and because they thought the number 57 looked good. So much better than 53 or 78.

Caterers can buy an 11 litre colostomy bag of the stuff to fill up their dispensers, but not at some football clubs where it has become a totem of modernity; a line to draw between the relaxed old school dude and the new uptight fascista. Hipsters are not in favour and probably prefer sriracha (it is far superior) while traditionalists see it as part of their national identity as they don a plastic Union Jack hat made in China.

In football it was famously banned by Fabio Capello when England manager, by Juande Ramos too and now Conte and Gerrard. All of them seemed to have confused tomato sauce with heroin, fearing it isn’t a healthy thing for professional athletes to be inserting into their bodies.

So what’s in it? Recipes are tweaked from territory to territory but in the UK, the ingredients are tomato concentrate, distilled vinegar, cane sugar, salt, onion powder, spice and natural flavouring. All seems harmless enough, though the term ‘natural flavouring’ is the food processing industry’s massive get-out clause. Without going into detail, natural doesn’t mean what we think is natural and can hide all sorts of crimes against nature. Maybe this is where they sneak the heroin in?

If you have a tablespoon of the blob, your body gets a little bit of salt, four grams of carbs from the four grams of sugar and that’s it. There’s no fat, no nutrition, no nowt else in it. Now, given that footballers slurp down energy drinks and gels which derive their super powers from far higher levels of sugar and yet these seem perfectly acceptable to the footballer lifestyle coach, what is this hooey all about? If you eat a small apple, you’ll get at least double the amount of sugar than is in the tablespoon of TS, if that’s what’s worrying Stevie or Antonio.

There are just 20 calories in a tablespoon of tomato emulsion. Given a player might typically expend 2000 calories during a game, this is insignificant calorific addition. No-one is getting fat on what I’m sure someone modern calls Tommy K. It’s very puzzling. If the only thing you get from it is a tiny amount of carbs and that’s considered bad, then Arsene Wenger was getting it all wrong by force-feeding all that foreign pasta muck to Arsenal players in the 1990s.

Jurgen Klopp apparently favours higher carb, lower fat and protein meals pre-game to avoid energy being used digesting the latter which takes so much longer than the former.

The fear of ketchup smacks of food paranoia and the sort of assumption that all human bodies are made the exact same and need the exact same foods at the same times to perform to their peak. But humans are not robots and they are all made differently.

I think it’s safe to say that banning ketchup or any foodstuff is really not about the foodstuff itself but about the manager’s power over his charges. Ketchup is a proxy control tool. By making them subservient to you, by granting or withholding favours, you are asserting yourself as the big gorilla in the room. They will live by your rules. It’s a form of mind control and nothing at all to do with health or nutrition, no matter what they say.

It’s all obviously bollocks. Eat it or don’t, you are depriving or adding almost nothing to your diet by indulging or not indulging. That’s the truth. It’s nothing to do with being an elite athlete.

Conte’s words are no better. “You have to prepare your body, your mind and also your heart.” Aye, fair enough, but that has nothing to do with tomato sauce, Tony.

But what about marginal gains? Surely anything that makes people perform a bit better is to be desired. Maybe, but where is the proof of the marginal gains achieved by the absence of four grams of sugar and a bit of vinegar and salt from their diet a couple of times a week? There isn’t any. And even if you set up a control group, no two bodies are made the same or, more crucially, are at the same physical place when you set up the control group. It’s impossible to discern any difference in performance, one way or another. Even if you could somehow discern a negative effect derived only from ketchup, or a positive effect from not imbibing, you couldn’t then draw a line from one person’s response across all people’s responses because we’re not all the same.

This isn’t about diet at all; it is about a culture of discipline. Depriving people of something they like is a way to control them. An expulsion of ketchup isn’t unprofessional, it doesn’t mean you’re not an elite performer, it doesn’t mean anything at all and it’s annoying that they’re passing it off as though it does, and even more annoying that people believe it, even while making other completely contradictory food choices. It’s the Diet Coke choice in the shopping trolley full of cake. Food paranoia is a very modern state of mind, the obsession with what is healthy and what isn’t, borders on the febrile in our society. A state of mind all the more ironic in a nation where food banks have become normalised and often ignored as proof of uncaring, cruel governance.

Tabloids love all the sauce talk, it plays to so many hot button topics in British life and given the UK has managed to make food a battle in the class and culture war, where the armies of quinoa do battle against the £3 chicken, you can see why.

But we need to take the saucey talk with a pinch of (Maldon sea) salt. Being deprived of it is no deprivation at all, being allowed to eat it will not make you under or over perform. It has no power. At the end of the day, it’s just an emulsified gloop in a bottle.