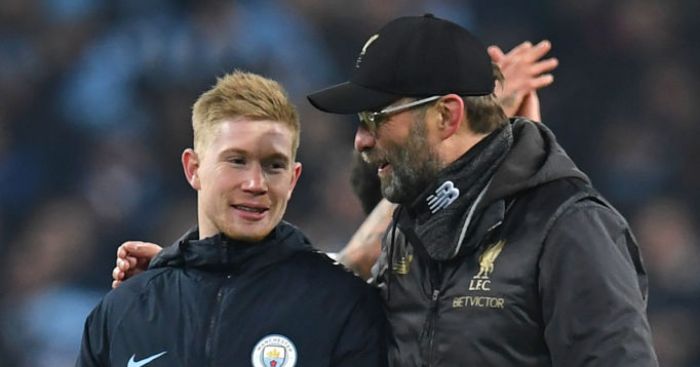 Kevin De Bruyne has been nominated for the UEFA Men’s Player of the Year award, while Liverpool boss Jurgen Klopp is up for Men’s Coach of the Year.

The Belgium playmaker, who recently claimed the PFA Player of the Year prize, has been named on a three-man shortlist with Bayern Munich pair Robert Lewandowski and Manuel Neuer.

Liverpool manager Klopp has been nominated for Men’s Coach of the Year and England right-back Lucy Bronze, who rejoined Manchester City from Lyon this month, is on the Women’s Player of the Year shortlist.

De Bruyne’s inclusion comes after an outstanding season in the Premier League in which he laid on a record-equalling 20 assists and scored 13 goals.

Lewandowski scored 55 goals in 47 games as Bayern won the treble, including 15 in the triumphant Champions League campaign. Goalkeeper Neuer missed just one game all season and kept six clean sheets in the Champions League.

Klopp guided Liverpool to their first league title in 30 years. They secured the Premier League crown with a record seven games to spare and went on to finish with 99 points.

He is nominated alongside Hansi Flick of Bayern and RB Leipzig’s Julian Nagelsmann.

Bronze, who won the award two years ago, won a third successive Champions League title with Lyon before returning to City.

Pernille Harder, who is now at Chelsea after moving from Wolfsburg, and Lyon’s Wendie Renard are also nominated.

The shortlists were compiled after a vote from a jury comprising 80 coaches and 55 journalists.