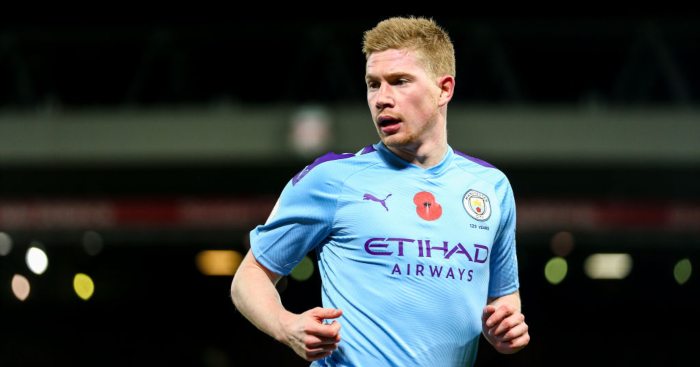 Kevin De Bruyne has won the Premier League Player of the Season award ahead of Jordan Henderson and Sadio Mane.

The Man City playmaker has had an impressive season at the Etihad, scoring 13 goals and assisting 20 more in just 35 league appearances.

De Bruyne and Henderson were seen as the frontrunners for the award after they both had excellent seasons in midfield.

But De Bruyne’s brilliant displays for Pep Guardiola’s side have proved he is one of the best midfielders in the world.

He helped Man City to second in the Premier League as they reached 81 points, scoring an incredible 102 goals in the process. That number means the side are the division’s highest scorers for the third season in a row.

While Guardiola’s side failed to retain the league like they would have hoped, De Bruyne continued to perform well.

Highlights of the 29-year-old’s goals and assists this campaign will show that he’s one of the most talented players in world football right now.

De Bruyne has previously admitted that he’s not too far away from challenging for the Ballon D’Or, and this victory for the player will only help his claim for next year’s award.

Meanwhile, Liverpool’s assist king Alexander-Arnold won the Young Player of the Season award. He recorded 13 assists this season as the Merseyside club stormed ahead to the Premier League title.

Liverpool boss Jurgen Klopp fought off competition from Chris Wilder, Brendan Rodgers and Frank Lampard to be named Manager of the Season.