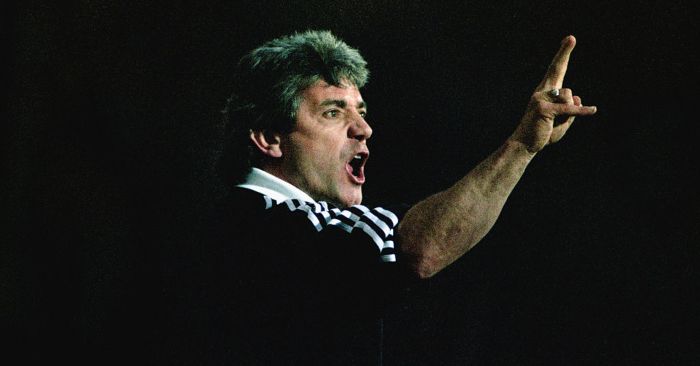 Man Utd showed us the real Kevin Keegan. But not by going to Middlesbrough and getting something…

“It was pure emotion pouring out, heart on the sleeve stuff, but that was the way I felt and I wasn’t going to bottle it up just because the general rule in football seemed to be that Alex Ferguson was untouchable.”

Most of us would probably agree with Kevin Keegan. Man Utd inspired plenty of envy with their success, which in turn spawned a lot of resentment, but Ferguson did have to get his own way most of the time. It was annoying, and someone going after him live on Sky Sports was a welcome glitch in the sports broadcasting matrix.

How would that moment be remembered if history had been different? If Man Utd hadn’t ‘gone to Middlesbrough and got something’, that would surely have been Keegan’s war cry. His call to arms, his rallying of the troops.

Not so long ago, David Ginola was on Monday Night Football talking about that interview and how the Newcastle players responded to it. They, well, loved it. They saw it as Keegan standing up for himself and giving a little back to a man who, at times, as great as he was, did carry himself as if the Premier League was his own back garden.

What’s irritating is just how popular Keegan’s rant became. Not just because of how often it’s played, how many misconceptions it gave life to, and how over-referenced it continues to be, but because it’s not a fair reflection of who he was. It’s a false portrayal.

It’s not even a particularly interesting bit of television. It’s a man doing a pressurised job and rising to provocation. It’s unusual, or certainly was back then, but uncomfortable silences, terse responses and accusations against referees and rivals have all become more common in the years since.

No, for the better depiction of Keegan, for the more faithful portrayal of the man and manager, go back a year and a half, to the January 1995 sale of Andy Cole.

“I wasn’t prepared to go into hiding. ‘All they want is an explanation,’ I said. ‘They want to know why, and I’m going down there to tell them.'”

Down he went, out he came. Extraordinary. Now, as it was then.

Keegan’s justification for the sale stands up to reason. He believed that Cole’s head had been turned. He knew that the player would likely score goals for Man Utd, but thought that his attitude had been deteriorating for some time and that it was only likely to worsen.

There’s no way of knowing for sure. But the justification for the transfer isn’t relevant – or at least that’s not what makes the footage so enthralling. It’s that Keegan was in that situation at all. As he reveals in his autobiography, neither he nor the club had any contingency. Les Ferdinand, David Ginola, Shaka Hislop and Warren Barton were signed later that year, but Cole wasn’t being sold to fund any of those moves specifically.

He felt compelled to go out, even though it wasn’t arm-in-arm with a replacement centre-forward.

For a lot of people, that’s probably a neat portrait of who he is. Whether it’s fair or not is a question for those who know him personally, but Keegan is associated with decency, honesty, and that raft of homely virtues that have been on the wane from football for decades.

That’s perhaps why his accounts of Mike Ashley’s first years at Newcastle are so damning. Keegan was incredulous at the way the club was being run in 2008 and appalled by the cast of blowhards that had been shuffled into management roles. When he tells the stories now, it’s as the narrator. He’s the public, reacting in the way that any fan would on finding out that, actually, their club had been invaded by charlatans.

It’s in keeping with the ideal of Kevin Keegan. He ran further, tried harder, and always gave his best as a player. But he spoke from the heart and with sincerity as a manager, too, and while that could often make him seem naive, or even child-like, it made him relatable and trustworthy and much more likeable.

And he wanted to be liked. That he felt the need to justify the Cole transfer was very telling, because football’s disdain for having to explain itself is not a new phenomenon. Imagine some of his ’90s peers acting in the same way: Ron Atkinson, Gordon Strachan, George Graham, Arsene Wenger. They weren’t necessarily all arrogant men, although some obviously were, but the shared perspective always seemed to be that fans should be seen and not heard – and definitely not listened to and interacted with.

Actually, had anyone else stood on the steps of a stadium, pleading for patience and loyalty, they would have been ridiculed. It would have been interpreted as an act of desperation or perhaps even vanity. If Jose Mourinho did something like that now, we’d be searching for the subliminal messages within his performance. Jurgen Klopp would be accused of pandering.

With Keegan it was different. It was obviously authentic, because he didn’t possess that tricky gene, or the conniving DNA of some of his peers. He wanted to explain himself, yes, but what people thought evidently mattered to him and in a way which was unusual. His England resignation was a case in point. The job was too big for him, he admitted. He needed to resign immediately after that defeat to Germany, avoiding the risk of anyone thinking that he was clinging to something he didn’t deserve.

There’s definitely something of that in the footage from January 1995. It doesn’t show Keegan demanding that everyone agree that he’s right. It’s more conciliatory. He went out in front of St James’ Park because he knew the history, he understood how another migration from the north-east (Waddle, Beardsley and Gascoigne) would have felt, and because he wanted to show his grasp of that texture.

“If I’ve got it wrong, there’s a bullet with my name on it.”

That should be a much, much more famous quote. Just because it’s so searingly, startlingly honest. It describes someone at pains to make the point that he understands the gravity of a situation. In the decades since, how many other coaches have laid themselves as bare as that?

Of course, “love it if we beat them” remains on regular rotation for many reasons. Not least because it occurred live on Sky Sports and tallied with their intent to make football an ever-undulating melodrama. But it’s slapstick, gibberish, and – over time – has become the costume into which Keegan has been forced.

The other day – I forget where – I read that Keegan hears that line wherever he goes. He can be walking down the street in almost any part of the country and some wag in a Range Rover will lean out of a window, quoting his worst moment back to him. 25 years later.

That’s very sad. It’s hugely disrespectful and a terrible indictment of how easily amused a lot of people are, but it’s also something he doesn’t deserve. He won back-to-back Ballons d’Or. He’s one of the greatest players in this country’s history. He remains a deity in Hamburg, too, where his image still appears in all sorts of places: on magazine covers, posters, and the back of old replica shirts.

And yet here, at home, his coaching identity is trapped within that little pantomime. He’s on stage forever, jabbing his finger at Richard Keys, with his voice rising, his eyes glowing hot and the history already written. He deserves better. Football lives are always distilled down to a few short seconds, but Keegan’s should at least reflect who he was – and that personality was really at its most vivid on the steps of St James’ Park, while Andy Cole was becoming a Man Utd player.