Home F365 Features Keys & Gray: Have you heard? They’re so, so happy 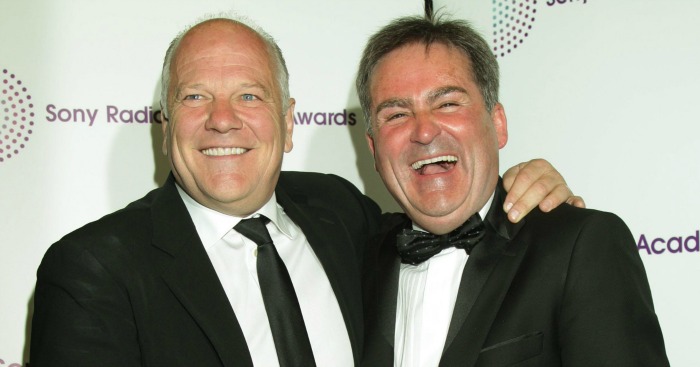 As you’ll probably know if you’ve either been reading Football365 for a while, or if you saw our merciless dictator Sarah Winterburn’s interview with The Set Pieces last week, this site has featured a few interesting writers over the years. There was David Icke, who tried to turn his column into a vehicle for exposing the lizardy cabal that secretly runs the world. There was Iain Moody, who at that time was yet to display the sort of spicy exchanges about gay snakes he allegedly shared with Malky Mackay. And then there was Andy Gray, who to the eternal shame of the site was billed as the ‘best pundit in football’ when his work appeared on these pages.

In fairness, for a little while there he was. His F365 columns, though…well, we’ll leave you to decide on that, if you read them. Usually Sarah would give him a ring and mention a few issues of the day, Gray would belch out a few half-baked thoughts which would then be scribbled down and any semblance of sense and coherence would be entirely down to the ghostwriter. As an aside, he would perhaps unsurprisingly always refer to Sarah as ‘darlin’ and curiously, at whatever time of day we would call him, he would always be having lunch, and request that we rang back later. This always brought to mind the pigs in ‘A Muppet Christmas Carol’ who emerge from a tavern, one of them says ‘Well, that was a fine meal…what now?’ and another responds ‘Lunch?’

Gray looks like he has plenty of time for lunch at the moment, and that lunch tastes good. Why? Because he’s with his best buddy Richard ‘Keysey’ Keys and working for beIN Sports in Doha. We aren’t entirely aware what Gray thinks of life out in Qatar, but through Keysey’s Twitter account and blogs, we can assume he also believes that beIN is the bestest sports broadcaster in the world, providing unrivalled football coverage and certainly better than that other lot – British Satellite Broadcasting, or whatever they’re called now.

Andy and Keysey are having the time of their lives, and we know this because they keep telling us about it, in the same way that you know those people on Facebook who constantly post pictures of themselves doing various fun activities are in the middle of a completely brilliant life, and absolutely do not go home and cry at night.

This week, for those of you who bafflingly don’t follow Keysey on Twitter, he posted a picture of him and Andy clinking glasses in celebration of the five-year anniversary of their departure from Sky.

Happy Anniversary Andy – 5 years after one of the biggest carve ups in tv history. I had to have a glass tonight! pic.twitter.com/s3BUyMyHpO

It’s worth taking a moment to remember exactly why the two left Sky. Keysey resigned in solidarity with his sacked mate (although not before footage of him emerged speculating whether a clearly embarrassed Jamie Redknapp had been ‘hanging out the back of it’, the ‘it’ in question being a human woman), which would be a slightly more admirable stance if said mate had been shown the door for something other than encouraging Charlotte Coleman (nee Jackson) to have a brief rummage in his Bill Grundies.

So just to clarify, Keysey calls being rumbled for sexual harassment in the workplace a ‘carve-up’, and seems to regard it as one of the great injustices of our time. It truly is a tragedy that these days, in the age of pinko nancy political correctness gone mad, that you can’t attempt to coerce an unwilling female colleague to place her hand in your trousers and keep your job without any consequences.

This is all quite reminiscent of when the BBC finally sacked Jeremy Clarkson and there was not only an internet petition, but that clattering bell and political blogger Guido Fawkes hired a tank to advance on Broadcasting House, demanding the reinstatement of Mr Bootcut Jeans 1998-2015. Again, it’s worth taking a moment to remember that Clarkson, having bafflingly escaped the boot for multiple casual racist japes and assorted other heinous remarks, was binned because he punched a workmate who hadn’t provided him with a satisfactorily hot supper. The difference between Clarkson and Keysey seems to be that at least Jeremy has a slight whiff of self-awareness, and was vaguely cognisant that he’d done something wrong.

It’s quite impressive really, that half a decade on Keysey still goes on about Sky. You’d think that, as he and Andy are so happy where they are now – and we know they’re happy because they keep telling us they’re happy – they wouldn’t have cause to remember something that happened to them five years ago, carve-up or not. In the same way that you can definitely tell someone is over their ex by the way they bring them up all the time, you can tell Keysey and Andy would definitely prefer to be at beIN than still at Sky, and that whole unfortunate carve-up/incidence of workplace harassment had never happened/they had never been found out.

You can just imagine Keysey and Andy, as they’re drinking something fizzy and chilled, chuckling and saying “Remember where we used to work? It’s so much better here now, isn’t it? We’re definitely much happier now, aren’t we? Much happier.” They look into each other’s eyes, with fixed grins, and agree they’re much happier now. They keep looking, keep agreeing, but there’s a silent acknowledgement. They know. They both know.