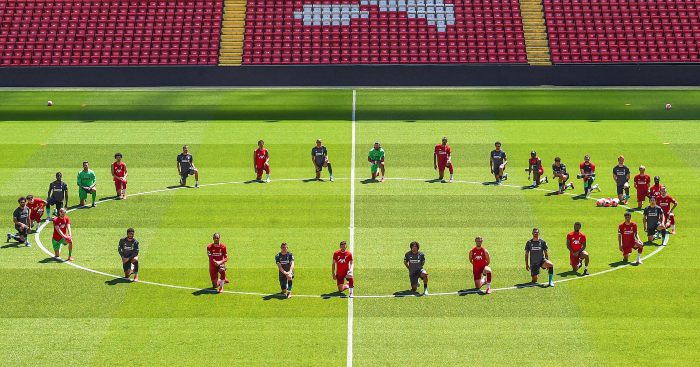 The chairman of Kick It Out has suggested that every Premier League footballer could ‘take the knee’ in support of the Black Lives Matter campaign in protest at the killing of George Floyd by police officers in Minneapolis.

Liverpool’s players made the powerful gesture during training at Anfield on Monday afternoon, posting the image across social media.

The entire squad knelt in Anfield’s centre circle ahead of today’s training session in a powerful show of support for the #BlackLivesMatter movement.

This weekend Jadon Sancho revealed a ‘Justice for George Floyd’ t-shirt when scoring for Borussia Dortmund – which earned him a booking – while Marcus Thuram ‘took the knee’, a non-violent protest which was the brainchild of the NFL player Colin Kaepernick.

Kick It Out chairman Sanjay Bhandari would like to see all Premier League players make the same gesture when the season resumes on June 17.

“I’m not sure how you can sanction Marcus Thuram,” said Bhandari in The Guardian.

“I don’t think he’s done anything wrong. He’s just taken a knee. I wonder if that’s the thing I would encourage if players want to protest. If you score a goal and take a knee could everyone do that? Not just the black players. The white players too – everyone.

“Every player should do it. It should be teams doing it. You saw the Erling Haaland celebration after the first game back where all the Borussia Dortmund players did the social-distancing celebration.

“They could all take a knee. Racism’s not about black players or brown fans. It’s about all of us. Racism corrodes society and we’re all hurt by it. Everyone should want to demonstrate their solidarity and disgust.

“If they could do that by taking a knee, well if every player did that it would be quite a powerful message. I would be interested to hear what the authorities thought of that, whether it would constitute a breach of the rules. To me that is about demonstrating solidarity.”