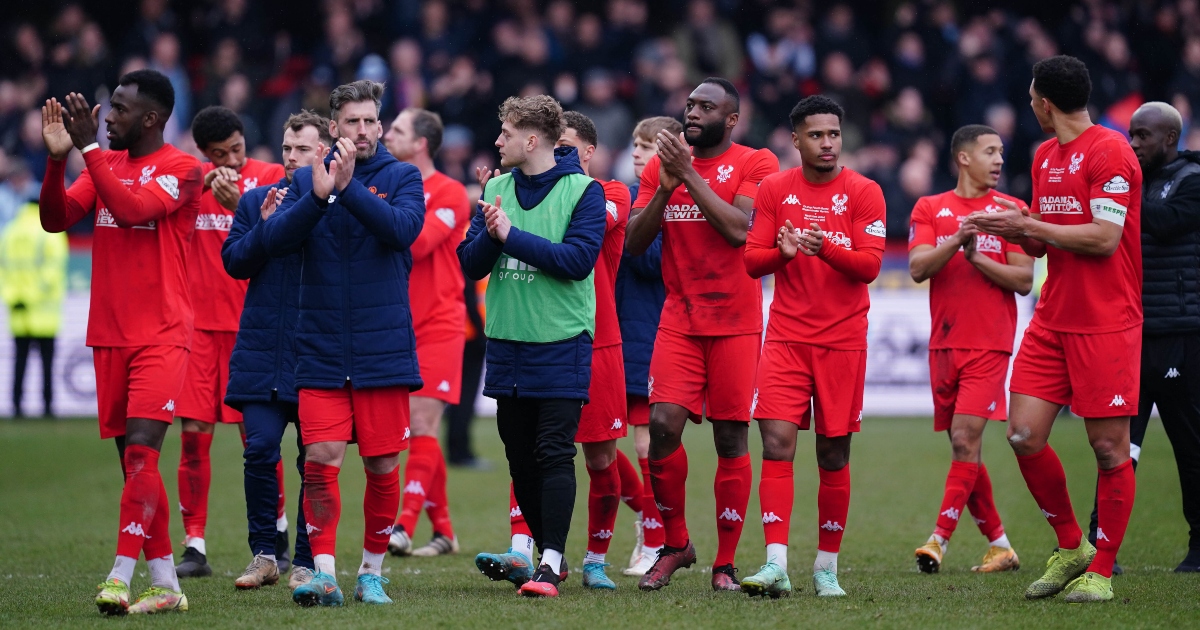 West Ham avoided a shock FA Cup exit at Kidderminster after Jarrod Bowen scored deep into extra time to win the match 2-1 for the Irons.

The forward struck with virtually the last kick of extra time as the Hammers, wretched for most of the game, sealed a barely deserved win.

They needed Declan Rice’s injury-time leveller to force extra time just as it looked like National League North side Kidderminster would off an almighty fourth-round shock.

Alex Penny had given the heroic hosts a first-half lead after terrible Hammers defending.

Harriers, 113 places below the Premier League visitors, deserved so much more after nearly writing themselves into FA Cup folklore with one of its biggest upsets.

Kidderminster went toe-to-toe with the Hammers who narrowly avoided an embarrassing defeat and one of the worst in their history.

Directionless, passionless and aimless they had no hiding place until Rice and Bowen bailed them out.

David Moyes was part of the Preston team dumped out of the FA Cup in 1994 which paved the way for Kidderminster’s last meeting with the Hammers.

Then, Harriers gave West Ham a scare before losing 1-0 in the fifth round and Moyes gave the hosts due respect by naming a strong side.

Absolutely heartbreaking. But these boys, they're so special. Moments from history, they'll all forever be legends here.#Harriers #COYR pic.twitter.com/xI0PIH7MTK

But it mattered little during an awful first-half performance which was littered with errors.

Ben Johnson drilled over after six minutes and that was as good as it got before Sam Austin, one of the scorers in Kidderminster’s third-round win over Reading, shot too close to Alphonse Areola from the edge of the box.

It proved the hosts would find openings and Ashley Hemmings was the next to try, although his tame effort was easily gathered by Areola.

The Hammers were unnerved, though, and lost rhythm – meaning it was less of a surprise when Harriers grabbed a 19th-minute lead.

It was all down to a catalogue of West Ham mistakes, starting when a dawdling Issa Diop took down Amari Morgan-Smith on the right.

Areola and Diop made a mess of dealing with Sterling’s free kick and the defender’s weak header fell to Penny to fire in from eight yards.

The confident hosts continued to press and Sterling guided a free kick just wide as Kidderminster looked to firm up what was a comfortable lead.

There was little response from the Hammers and their sloppy first-half performance was summed up by Johnson placing a routine pass straight out of play.

Harriers had everything West Ham lacked, commitment, purpose and unity, typified by the outstanding Matt Preston in defence.

Said Benrahma shot wildly off target just before the break but Luke Simpson had been a bystander in the hosts’ goal and the Hammers needed to change.

Moyes replaced the dreadful Diop and Alex Kral with Craig Dawson and Rice to shore up the rickety visitors and, while they improved, it was barely enough.

Finally, West Ham began to exert some pressure but the hosts remained firm with Simpson turning Benrahma’s drive wide just after the hour.

Yet there was no expected onslaught and the belief Harriers would hold on grew around Aggborough.

Andriy Yarmolenko’s terrible dive in the area highlighted West Ham’s desperation but they were rescued in the first minute of injury time by Rice.

Pablo Fornals slipped the midfielder through and he cut across Preston before lashing into the roof of the net from six yards.

It sent the tie to extra time and, with penalties looming, Bowen shattered Kidderminster when he tapped in with seconds to go after Aaron Creswell sent the ball back across goal.