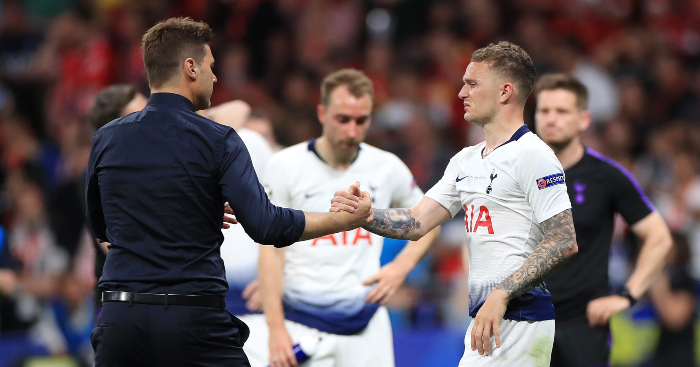 Former Tottenham defender Kieran Trippier would “only” return to the Premier League to be reunited with Sean Dyche at Burnley.

Trippier joined Atletico Madrid last summer and has been one of the best English performers of a season in which they knocked holders Liverpool out of the Champions League.

The right-back was happy for the “small revenge” of helping beat the side that conquered Tottenham in last June’s final as Trippier was robbed of a fairytale ending to his north London spell.

The 29-year-old spent four years at Tottenham but cherishes the three he had at Burnley more, with his retirement plan centering around a potential return.

“I would love to retire there,” he told the Burnley Express. “That’s my aim, to retire at Burnley. I have a great relationship with Sean Dyche.

“I want to play as high as I can for as long as I can, but I’ll know when the time is right. If I’m at Atleti for another two years that’ll take me to 32 and Burnley’s the only club that I’d come back to England for.

“That’s the way I want it to plan out. I want to play here for as long as I can and then finish playing for a manager like Sean Dyche while ending my career at Burnley. That’s where I want to finish.

“I’ve spoken to him a couple of times a week ever since I left Burnley,” he added of his former manager. “I always have done. We have a great relationship.

“We’re in contact all the time about family, football, he still mithers me about taking me back one day! It’ll happen one day for sure, I’ll 100% be back playing for them.

“After that I’d start my coaching badges and I’d love to coach at Burnley. I’d just love to go wherever Sean Dyche goes because I have a great relationship with him.”