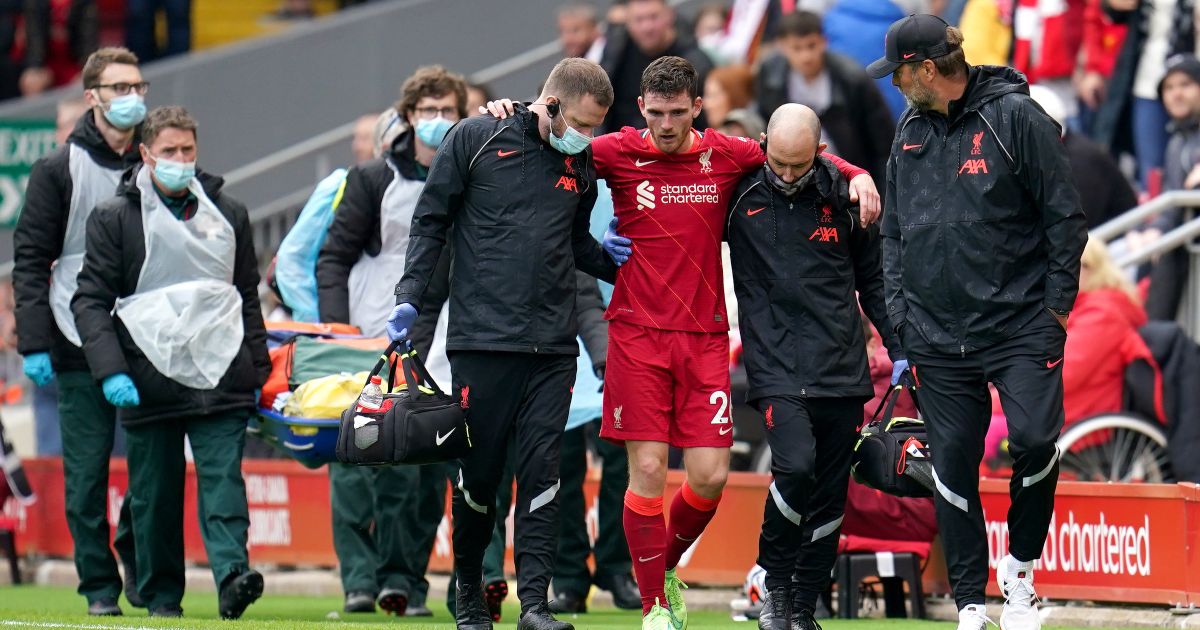 Jurgen Klopp says Liverpool “got lucky” with the severity of Andy Robertson’s ankle injury but he is still likely to miss a number of weeks.

The Scotland international picked up an ankle issue against Athletic Bilbao on Sunday and was helped off the pitch by members of the Reds’ medical team.

The injury will keep him out for their Premier League opener against Norwich City and beyond – but it’s not as bad as first feared.

“I think we got lucky with Andy, it could have been much worse,” said Klopp.

Robertson’s foot is in a protective boot after leaving a hospital in Liverpool yesterday – but the left-back is remaining upbeat about his time on the sidelines.

“Scan suggests nothing too major but there’s some ligament damage which will need to mend,” Robertson said on Twitter.

“I will be grafting every day so I can help the team again sooner rather than later.”

Thanks to everyone for the kind messages and support. Scan suggests nothing too major but there’s some ligament damage which will need to mend. I will be grafting every day so I can help the team again sooner rather than later. Good luck to the boys playing tonight #YNWA pic.twitter.com/urKPCLmHgS

Kostas Tsimikas is likely to be Robertson’s replacement at Carrow Road despite the Greece international having only played six Premier League minutes last term.

Liverpool had another friendly on Monday night, beating Spanish side Osasuna 3-1 thanks to two goals from Roberto Firmino and another from Takumi Minamino.

On the performance, Klopp told the club’s official website: “The first half was absolutely exceptional in real different departments. The way we, first of all, defended the second balls – because we didn’t have to do that last night too often but today obviously Osasuna have a different approach, so a lot of long balls.

“We had a lot of finishes so they had a lot of goalie kicks. I liked the formation around that, winning these balls back, passing forward as quick as somehow possible, offering these runs. Bobby between the lines was exceptional but what Kaide and Taki offered from a speed perspective was absolutely exceptional as well.

“Played really good in midfield, Ox was on fire obviously, Fab controlled together with the boys out there.”