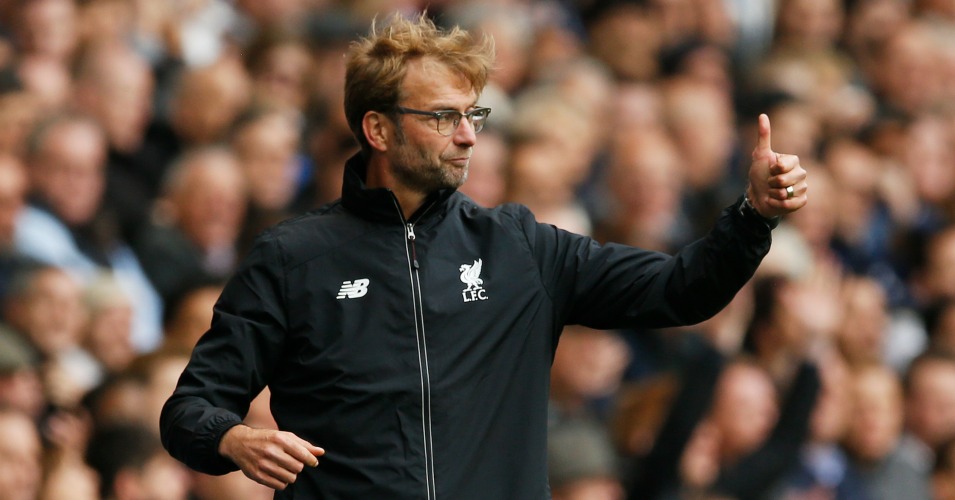 Jurgen Klopp believes Liverpool can “have fun with” Divock Origi as injuries leave the Belgian as the club’s starting striker.

Origi made his first-ever Premier League start on Saturday in Klopp’s first game as manager as Liverpool held Spurs to a 0-0 draw at White Hart Lane.

The Belgian was previously set to start as a substitute but a late injury to Daniel Sturridge, combined with Christian Benteke and Danny Ings’ own injury issues, meant that Origi was handed a chance to impress.

Origi’s only previous Premier League experience was 17 minutes as a substitute in defeat to Manchester United last month, and though the former Lille forward has started in both of Liverpool’s Europa League matches, much was expected of the 20-year-old in leading the line against Mauricio Pochettino’s side.

Klopp offered his backing to the youngster, revealing that he had tried to sign Origi while he was Dortmund manager, and declaring that he is “a very good player” despite his clear lack of experience.

“I wanted to take him to Dortmund when Liverpool bought him, but he went to Liverpool and then on loan to Lille,” Klopp told BT Sport. “He’s a very good player, very fast, good technician. In this moment not full of experience in the game, because he didn’t play so often, but we will have fun with this player, I’m sure.”

Injuries have highlighted the paucity of options available to Klopp during his first few games as manager, with youth team striker Jerome Sinclair now seen as Origi’s back-up before Sturridge’s eventual return.

“I need strikers,” Klopp said. “When I thought about coming to Liverpool, I thought, ‘Four strikers, this quality, cool.’ Now I have one.

“That’s not the best situation, but I like Divock and young Jerome Sinclair was on the bench and was close to coming on. I don’t think about players I don’t have because it doesn’t make sense. The best situation is when all the players are at 100 percent. It doesn’t happen so often.”

Origi impressed at White Hart Lane as a lone striker, testing Hugo Lloris with a low second-half effort and making two key passes – the joint-most of any Reds player – as Liverpool battled to a goalless draw.

Speaking to the club’s official website after the game, Origi believes Liverpool are “very strong together” under the German’s tutelage.

“I work very hard and I tried to work hard for the team today,” he said. “It’s a new system and I was very excited, just a bit unlucky with the finishing but I’m sure it’ll come.

“Everybody has encouraging words for me so I just have to continue like this and it will be okay. I feel for sorry for the boys that are out but I will just try to support the team and do my best. Everybody says that I have the qualities, I just have to work hard and the goals will come.

“[Klopp told us] just to play with passion and no fear,” he continued. “He believes in everybody – the young players, the old players, we’re all here because we have quality.

“We just have to work hard and trust him, and we all trust him so I think we can have a good season. When you look at the coach, he sends out a very strong feeling, a very powerful feeling. You can see it through the team. Today we had a lot of energy, we pressed, we played with a lot of joy.

“We are a very strong together as a club with the fans also, it’s a very nice thing.”