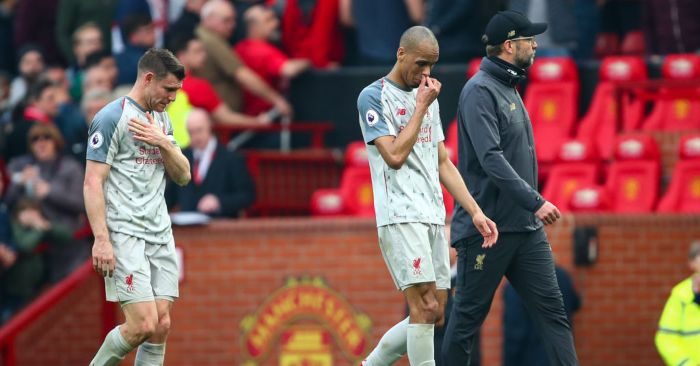 “When we started the game it was brilliant actually,” said Jurgen Klopp, the final straws slithering from his clutch and his mask slowly beginning to slip. “We started exactly like we wanted to start. It was direct, we played in behind, we wanted to be there, we followed the ball, we pressed high and it was really good.”

The German could have been describing any Liverpool victory from the past two seasons. Those “brilliant” starts that suffocated Arsenal and Manchester City; the “direct” football that crushed sides from Watford to Barcelona and everywhere in between; the balls in behind, the insatiable desire, the ferocious press. These were and are the hallmarks of their rise from Emre Can peons to European champions.

Yet he was speaking after a 0-0 draw against Manchester United in which their only shot on target came from Daniel Sturridge in the 33rd minute. It was a game in hand on Manchester City that allowed them to ostensibly increase their lead atop the Premier League table to one point, but the reality was a shift in momentum and initiative that they would be marginally too late to correct.

Perhaps Klopp knew it. He referenced the spate of injuries – “a lot of interruptions and things like that” – as effecting Liverpool’s “rhythm”, despite them only losing Roberto Firmino in comparison to United seeing Ander Herrera, Juan Mata and Jesse Lingard all withdrawn by half-time. He defended his side by saying that “if United played today with a full team like they played the last couple of weeks or so then it’s a completely different game”. He stated simply that “things happened”, as if he was not employed to prevent, predict or react to them.

“All of a sudden it was like we had something to lose here,” he added. “If we don’t win today against this team, then something is wrong with us, stuff like that.”

It was an uncharacteristic show of cowardice, an atypical focus on outside influences, a bizarre attempt at deflection that continued into their next setback: Klopp blamed “the wind” for failure to beat Everton a fortnight later.

Those games remain the last two in which Liverpool dropped Premier League points; the identity of the opposition is no coincidence. They treated relative molehills as mountains and subsequently struggled to climb them, all because of rivalries that have rarely been so one-sided in their favour. Klopp felt one point from each would be enough and acted accordingly.

His latest visit to Old Trafford, a stadium where he has never won in four visits, offers him as good a chance as any to right one of his biggest recent wrongs.

It seems perverse that Klopp could have possibly referred to the hosts as “the favourites” eight months ago. The United of February was much better and more confident than the mid-table mess we see in October, but the gap was 14 points, United’s tide was starting to turn and their injuries were debilitating. Context offers a far kinder perspective than hindsight.

The manager himself even admitted after the game that United were “beatable”. His actions spoke louder than his words. James Milner started ahead of Trent Alexander-Arnold; Mohamed Salah was substituted with ten minutes remaining and the scores level; 64.6% possession translated to no shots of any kind after the 71st minute. Liverpool settled for a point when all three were available to those who showed courage and belief.

A similarly timid approach on Sunday would be unacceptable. A woeful United have been weakened further by injuries to David de Gea and Paul Pogba, pre-match knowledge of which leaves Klopp with no excuses. Liverpool got a manager sacked the last time they treated United like any other opponent almost 12 months ago. They are capable of making history repeat itself.

Klopp cannot and must not overthink this match. Liverpool should not complicate football’s simplest equation: the best team playing well tends to equal victory. United – as with any team – are not to be underestimated, but therein lies the point: they are just like any other team.

A combination of their own belligerent brilliance and City’s vulnerability has given Liverpool a substantial safety net. Using it here would feel like a step back after giant leaps forward.

A record-matching ninth win to start a Premier League season and 18th victory overall in succession does not even come into the reckoning. They have handled greater pressures before. Liverpool are the better team with better players and a better manager in much better form. And they’d better not blow this one. Klopp has even fewer excuses this time.