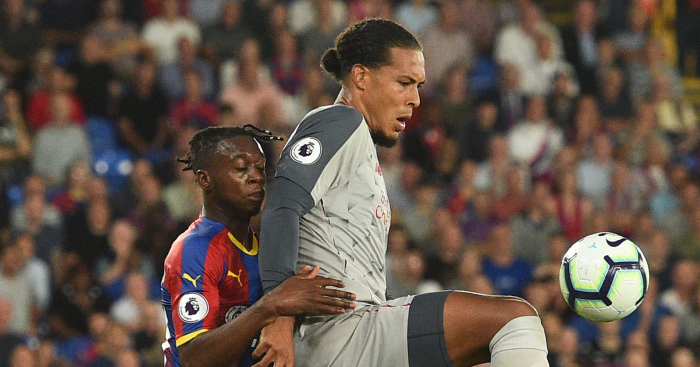 Van Dijk was pivotal as Liverpool maintained their perfect start to the season with a 2-0 victory over Crystal Palace.

The Reds kept their second clean sheet in as many games with a commanding display from Van Dijk, as fellow recent arrivals Alisson and Naby Keita impressed alongside him.

Klopp was eager to praise his January signing.

“It was really, really good,” he said of van Dijk’s performance.

“It’s obvious. Quality costs a specific price, it’s with cars like that, with a lot of things like that and with players as well, that’s why we paid it. Nobody thinks about it anymore and that’s good because he’s a player in this market, in the moment, he’s at least worth it.

“We don’t know what will happen in the future [with transfer fees], but it’s not important to us. He loves playing with these boys and that’s the most important thing for me.”

Carragher echoed the sentiment with a post-match ode to the Dutchman.

“I knew Van Dijk was a good player, but he is better than what I thought,” he told Sky Sports.

“I can’t think of a defender off the top of my head that is better. He’s the man to step into the positon Vincent Kompany has had over the last four seasons as that leader and colossus.

“They are very similar as players – there is nothing they lack. When Kompany was at his best three years ago, I didn’t think there was a centre-back that was better than him.

“Over the next three or four years, if Liverpool could win a league or a Champions League, I think Van Dijk has the potential to actually go down alongside Alan Hansen if we’re talking about Liverpool’s best ever teams – that’s how good he is and how good he can become.

“If Liverpool under Klopp win something big, and Van Dijk is at the centre of it, he should be disappointed if he’s not alongside Hansen when people talk about the great Liverpool centre-backs.

“There isn’t another centre-back that ticks almost every boxes in terms of presence, pace, strength and ability on the ball.

“Normally a player has a couple of those, they are lacking somewhere else and their defensive partner will cover some of those areas. Van Dijk has all of them at the moment.

“Players and leaders like him have to be the ones that take Liverpool to something big. That’s when you’ll be remembered, when you win something big.”