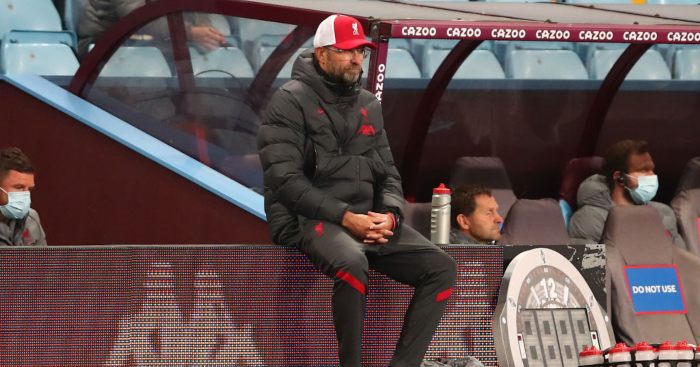 Jurgen Klopp claims the lack of crowds goes some way to explaining the high-scoring games in the Premier League this season, including his side’s 7-2 defeat to Aston Villa last time out.

The top flight has seen a crazy number of goals in the opening games with the 44 scored in matchweek two breaking the previous record.

And many have suggested that the lack of crowds in the grounds may have something to do with it; Klopp agrees.

He said: “It looks like the reason [for scorelines]. It makes sense we see it like this. I don’t know 100% but I see the scores. The crowd they sharpen your focus, normal. It’s not an excuse, one team scored 7 the other 2, so only 1 team suffered. We know it’s our job.”

Liverpool travel to Goodison Park to take on Everton on Saturday, who are fluorishing under Carlo Ancelotti and sit top of the table with four wins from four.

“The team look really, really good. I’d like to say something different.

“A lot of teams made good business in this window and they will all improve.”

Everton haven’t won a Merseyside derby for ten years and many believe this represents their best opportunity in a long time.

Of the derby record, Klopp added: “Ten years for them, long may it continue from my point but we’ve never once thought about it. We’ve never had that in our mind. Hardest work for us tomorrow and we will be ready.”