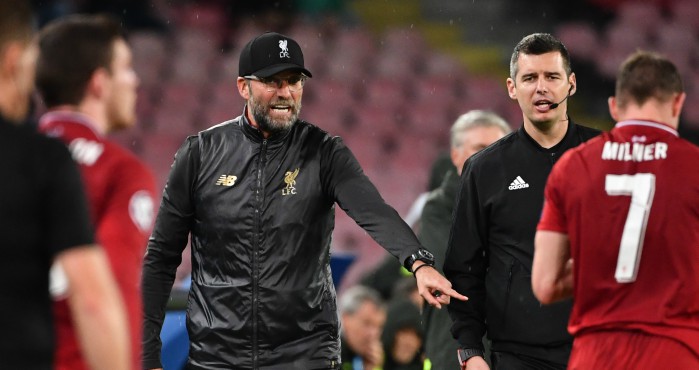 If you are going to play that badly – and Liverpool really did play that badly – then the small mercy is that such a terrible, disjointed performance came in an away game against a Napoli side who have already somehow drawn to Red Star Belgrade. Liverpool drop to second but now face a double-header against a team whipped 6-1 by Neymar and PSG in an earlier game. Defeat in Naples is no embarrassment; the Italian side are unbeaten at home since April and have not failed to score there in 2018. Liverpool should still progress from this group.

The real damage is not to Liverpool’s Champions League ambitions but to their sense of invincibility. After rescuing a draw at Stamford Bridge on Sunday that even Maurizio Sarri admitted they deserved, there were few tears shed for their previously perfect league record. They lost top spot to Manchester City but they were still unbeaten in any competition that truly mattered. Any whispers about a lack of cohesion among their forwards was shouted down with excited talk of the heartwarming form of Daniel Sturridge. Liverpool had the two things they had craved in their last, trophyless season: A staunch defence and a Plan B for those rare occasions when their attacking triumvirate were Sloppy, Wasteful and Misfiring.

Against Napoli they did not even get the chance to misfire as the lack of dynamism in midfield crucified their usual game plan. The early loss of Naby Keita to injury seemed to neuter Liverpool completely, leaving the front three to feed off scraps. And feeding off scraps only works when players are at the top of their game; Liverpool’s are not even half-way up that particular summit. With a stodgy central midfield and out-of-sorts strikers, the end result was a complete lack of penetration. This was the first time since 2012 that Liverpool have not managed a single shot on target.

So with Liverpool playing as poorly as we have seen in 2018, why did Jurgen Klopp not react? Why – with nothing in red working barring a central defence that was working tirelessly and near-miraculously to keep out Napoli – did Klopp not make a single unforced substitution until the 75th minute? Why did potential match-winner Sturridge remain on the bench until the final seconds? Why – with the midfield looking so devoid of ideas – did Xherdan Shaqiri remain on the bench all night? The game was crying out for invention from somebody not wearing blue.

Did the mistake come even before the game when Klopp chose to keep the same XI from Saturday’s clash with Chelsea, barring the replacement of Henderson? Having finally put together a squad rather than just a starting XI, why was he so reluctant to use it? This was not a must-win or even a must-not-lose game thanks to results in the opening round of fixtures; there should be no doubt that Sunday’s tantalising clash with Manchester City was the priority. Will he play those same players again, even though only the brilliant Joe Gomez and Virgil van Dijk emerged with any real credit?

After weeks of almost unreserved praise, Klopp will now face questions as deserved as that defeat. Suddenly, Liverpool have played three games without victory and were ruthlessly exposed by Napoli. Do not be fooled by the scoreline because this was a mauling and Liverpool will be feeling bruised. Can they escape with no permanent damage done? The real season begins here.