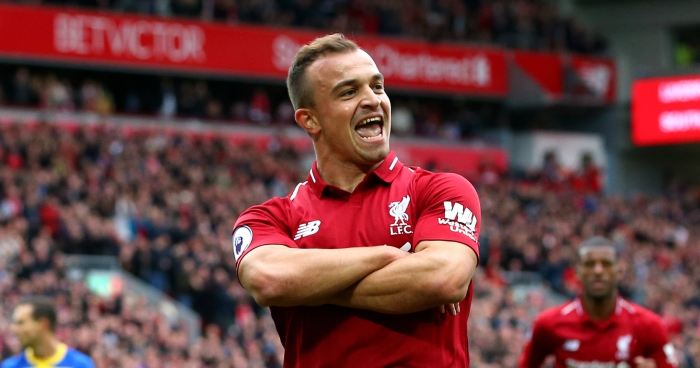 Liverpool manager Jurgen Klopp admits it was not easy to take off Xherdan Shaqiri at half-time after the Switzerland international had played such a pivotal role in the 3-0 win over Southampton at Anfield.

The 26-year-old, on his first start since a £12million summer move from Stoke, had a hand in the Reds’ first and third goals but still had to be sacrificed at the break because Klopp felt holes needed to be plugged. He was symbolic of their improved squad depth.

“No it was not easy, to be honest. It’s my job to sometimes deliver news nobody wants to hear,” said the German.

“He was not injured, but I wanted to control the game, go back to our normal formation, and that helped us.

“That’s how it was at half time, but he’s a fantastic boy so there was no problem. I explained it to him, usually I don’t explain substitutions but I thought today it made a bit of sense.

“I would have done the same if it had been 2-0. That was the plan. We saw that we had a few problems.”

Klopp changed his formation to 4-2-3-1 to accommodate Shaqiri in a number 10 role and it paid off with his deflected cross resulting in an own goal by Wesley Hoedt, with his free-kick cannoning down off the crossbar for Mohamed Salah to score from close range to make it 3-0 after Joel Matip had doubled his side’s lead.

“It’s just good to have him. You saw the free-kick, it was outstanding. What a ball!” added Klopp.

“The whole team was not used to the system and as a new player usually you struggle most, but he didn’t. He tried everything, the only problem was defensive.

“Offensively, it was a good idea, but we have to work a bit more on that. He was good, I liked it.”