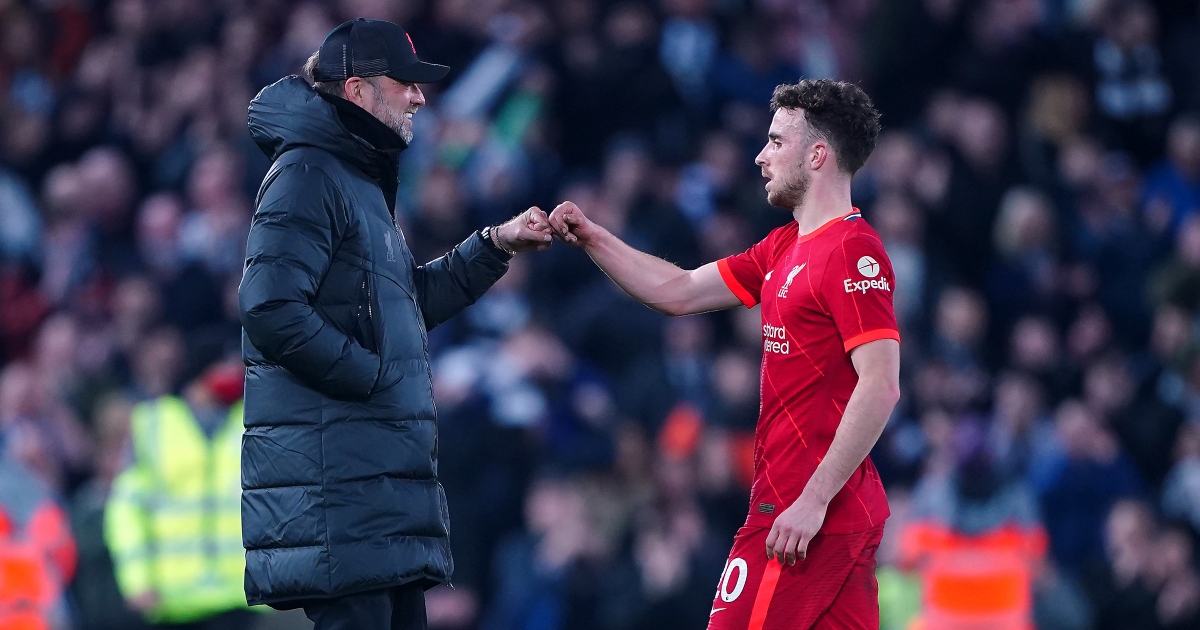 Liverpool manager Jurgen Klopp believes Diogo Jota “has turned into a really world-class striker” after his brace against Arsenal.

After a goalless first leg at Anfield last week, Jota’s first-half daisy-cutter caught Aaron Ramsdale flat-footed and he then saw a second-half VAR check rule he was onside following a smart finish as Liverpool won 2-0 at the Emirates Stadium.

It means Klopp’s Reds head to Wembley, where they will face Chelsea on February 27 after Jota stole the show in north London.

“We scored two wonderful goals, Diogo Jota was on fire,” he said.

“We were completely convinced when he arrived at the club he would help us massively. Since he is here he has made another step, he has turned into a really world-class striker.

“Mentality mixed with quality is the reason we signed him.

“Of course he scored two goals, he is incredibly important to us, so it is that mix of his skills that is really exciting. He is in good shape as well and long may it continue.”

Liverpool will be aiming to win a record ninth League Cup when they face Chelsea in their first appearance in the final in six years.

Diogo Jota has been absolutely brilliant against Arsenal today. What a performance. 👏👏 #LFC #ARSLIVpic.twitter.com/h57R333jpP

Before then, Liverpool have six games across three other competitions and Klopp will not be getting distracted by the Wembley date.

“You play a final, it is likely you will play an outstandingly strong team and that is what we do now,” Klopp added.

“Wembley is a special place, we have a lot of games to play until then. We will see where we are then, but we really put a lot of effort in this competition and we really wanted to go through and when you are in the final there is no reason to be a part of the final if you don’t want to win it.

“When we will be there at the end of February we will give it a go, but unfortunately the opponent probably will as well.

“The mood in the dressing room is over the moon. Difficult game, difficult time, but the boys were exceptional. First half, Arsenal started lively, then we calmed it down, played good football and created plenty. Second half similar.”

This leg was initially scheduled to be the first of the tie but was postponed after a number of positive coronavirus cases at Liverpool, while Arsenal had successfully appealed for Sunday’s north London derby at Tottenham to be called off.

This game had been in doubt but went ahead as planned, with Arsenal able to welcome back a number of players who would have been unavailable at Spurs.

The hosts started brightly, Alexandre Lacazette hitting the crossbar with a free-kick inside the opening five minutes.

But that was as good as it got for the Gunners, with Mikel Arteta bemoaning another red card – the 14th of his Arsenal tenure – as Partey was sent off for a pair of bookings in quick succession.

“I am very disappointed because when you have the final there, one game away, you have a level of excitement and you’re really looking forward to it,” Klopp said.

“We did everything we could to put a competitive team out and I think we had our moments in the game against a top side.

“Obviously it (the red card) is again a big loss and we have to learn from that. We played the last three games with 10 men and against those top sides you cannot do that because you are completely exposed.

“It is difficult enough to beat them, and with 10 men it becomes a real challenge and it is not what we need for sure with the amount of players out, not to have him.”