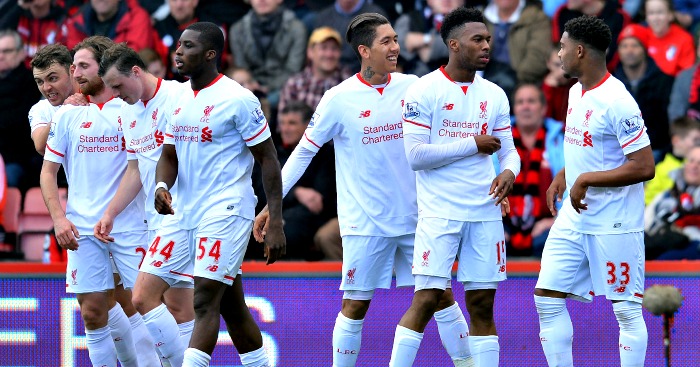 Liverpool manager Jurgen Klopp praised his young side for rising to the occasion after goals from Roberto Firmino and Daniel Sturridge earned a 2-1 win against Bournemouth.

Klopp made ten changes from the team that beat Borussia Dortmund at Anfield on Thursday to reach the Europa League semi-finals, with Firmino the only player to retain his place in the starting 11.

Goalkeeper Danny Ward and full-back Connor Randall made their debuts, and the Reds provided more reason to be excited for the future.

Firmino opened the scoring for Liverpool, then Sturridge met the end of Ibe’s cross to claim his sixth Premier League goal in his last seven starts.

Goalkeeper Ward put in a brilliant display on his debut, but was denied a clean sheet in the dying minutes when Cherries striker Joshua King fired in a low effort into the bottom corner to grab a consolation goal.

Speaking after the match, Klopp was full of praise for his young side after they came out on top against a hard working Bournemouth side.

“They’ve never played together,” said the German. “They could have defended better, played a bit more football in the first half – but it was really, really good.

“We changed a lot, and I am really pleased for all the boys how they played today. They were really brilliant. We were decisive in the right moments, and could have scored more.

“It got a bit exciting and close at the end, but it was a really deserved win.

“I was not worried. I am responsible for the line-up. It’s easy to say now, but I told the boys ‘you can play football, and if not then you can blame me.’

“We tried to enjoy the game, and I think we did. We had a young team, young wingers, young full backs, young goalkeeper, but the exciting thing is giving the young players the opportunity to be part of Premier League games.”

On his weakened selection, Klopp said: “We had no other chance to win. Sometimes rotation is for resting players for another tournament. But for us the most important tournament is always the Premier League, and we wanted to win this game. That’s the only reason. That’s why we took another formation.

“You cannot rest for another tournament, you can only try to find a few more fit players. That’s what we tried to do today.

Klopp then singled certain individuals out for praise, including winger Ibe, who reportedly had a falling-out with the manager recently.

“I heard from somewhere that Jordon has some problems with me or something?” he said. “Absolutely not.

“Only a few young players can come up, and sometimes they are in the squad, sometimes not.

“He’s still a brilliant, big, big talent which is very good for English football. He did well today with the pass for the first goal, and the cross for the second. I was very happy.”

“Kevin Stewart has three games now, and he has nine points…good record!”